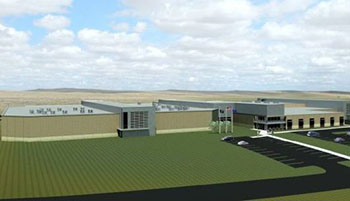 BISMARCK, N.D. — Construction broke ground on the combined jail for Burleigh and Morton counties to be built in southeast Bismarck, and it is slated for completion in January 2017.

Locally based UBL Design Group, in cooperation with New York-based Venture Architects, revealed plans for the new 476-bed facility last year. Locally based Comstock Construction is serving as the main contractor on the project.

The main goal of the project is to create more jail space for both Burleigh and Morton counties, which are currently operating at capacity levels, said Kyle Kirchmeier, Morton County Sheriff. The lack of space has led to financial burdens for both counties. Burleigh County had to budget more than $400,000 this year to house inmates in other facilities around the state, and Morton County continues to exceed its 42-inmate limit for its jail facility in Mandan by eight to 10 inmates on average daily.

The new jail is designed so that law officers can quickly book suspects to allow them to return to patrol, reported the Bismarck Tribune. The jail will be divided by a special-needs housing pod for certain inmates, a maximum-security housing pod, a medium-security pod and an area for minimum-security inmates where some will be allowed to leave for work release.

The design was influenced by the layout of other correctional facilities operating in the Midwest, Kirchmeier said. “It comes down to operating safety for the staff and inmates alike,” he added. “It was designed to be able to observe a majority of the facility movement areas at one central control point.”

All of the security functions — doors, water, lights and the camera system, for example — will remain in the central control office separate from public access areas. All of the inmate access will be inside the walls to include outdoor recreation areas, according to Kirchmeier.

“Once the facility is completed, the current Morton County correctional staff will have the opportunity to transfer to the new facility,” Kirchmeier said. “However, it may not be at the same rank structure that their current position is ranked, and they would then become employees of Burleigh County.”

Kirchmeier predicts that there will be challenges for the administrators in figuring out how both counties can benefit from the operation of one facility. “We are still early in the building phase so all concerns on oversight have not been finalized,” he said. “Outside the building process, the transportation of inmates to and from court in Morton County and the operational costs is a logistical concern as well as funding.”

Voters from each county approved a half-cent sales tax last June to fund the $79 million in bids approved for the project. Burleigh County will pay 87 percent and Morton County, 13 percent through separate sales taxes. Both counties started collecting the tax on Oct. 1. The tax will end once the new jail-related costs are completed and upgrades are finished to existing jail facilities in both counties.