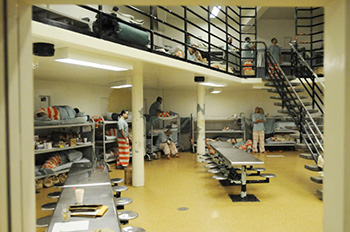 Although this 43-year-old jail was initially build to house approximately 825 inmates, the average daily population often reaches upwards of 1,150 detainees. Along with remaining consistently overcrowded, Monterey County Jail has recently seen a series of inmate deaths, including suicides and longstanding issues, which then led to a class action settlement aimed at improving these conditions for inmates.

Over the years, this jail has experienced “chronic” problems relating to their overseeing inmates, poor screening for contraband, inadequate staff training and lax discipline, excessive overtime spending, and even illegally diverted funds meant for inmates. The jail has also failed to follow through on a deal with the county’s probation department to provide services under a statewide prison realignment effort according to the report.

In response to this report, the civil grand jury has warned that conditions could get even worse without immediate action. According to a prepared statement by Sheriff Steve Bernal, who has been responsible for the operation of the Salinas-based jail since becoming sheriff in 2014, he “applauds” the grand jury’s efforts and agrees with some of its findings.

“The Sheriff’s Office looks forward to working with their partners to address the findings and recommendations of the grand jury and will continue to seek efficient and effective practices to ensure the safety, of staff and inmates,” declared Bernal.

Further included within this report is information regarding the jail’s inability to follow through on a deal with the county’s probation department, thus failing to cooperate with a statewide prison realignment effort. The report also found routine violations of state law, which require deputies to conduct visual checks on inmates at least once an hour at random intervals.

After reviewing video surveillance of inside the jail, the jury found that checks were frequently missed, skipped or not adequately documented. From Jan. 1 to March 31, the jail conducted proper checks on just 21 out of 90 days.

The jail also has very few rehabilitation and educational classes available to inmates, despite possessing available funding for both programs. The jury also found that at least half the money from the Inmate Welfare Fund fund, which brings in roughly $1 million a year from inmate spending on phone calls and commissary visits, is used to pay employees and not at all engaged in inmate education and drug and alcohol treatment programs as it’s supposed to be.

There is also a lack of viewing windows in dormitory areas, creating potentially dangerous situations for deputies who must open a door to see inside. In addition, Newly arrived inmates are put in a heavily-crowded holding tank with one toilet and sink, but without regular or adequate cleaning.

Current recommandations for the improvement of this facility include prison-strength view windows onto doors leading into inmate areas, adequate relief staff for a security camera control tower, prohibit inmate-to-inmate mail and hire another mailroom clerk. The grand jury has recommended the sheriff ask the supervisors for additional funding to increase staff positions and inmate programs.