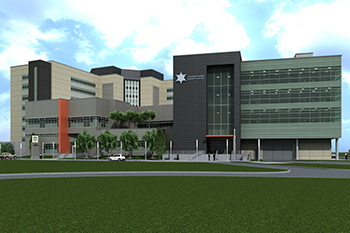 NEW ORLEANS — New Orleans Mayor Mitch Landrieu ordered the stoppage of all work on the contentious Orleans Parish Prison on June 24, only to have a civil district judge rule in favor of the sheriff’s office and temporarily order progress to resume on June 26. Work will now continue until July 8, when a hearing will take place to decide the project’s next move.

In a statement, Landrieu’s administration accused Orleans Parish Sheriff Marlin Gusman of multiple city code violations and failure to construct a facility that truly met the parish’s correctional needs — particularly when it comes to the care of inmates requiring medical or mental health services.

“The new jail facility being constructed is in plain violation of the law, including the Comprehensive Zoning Ordinance and the conditional use permit approved by the City Planning Commission and the City Council,” said Jared Munster, director of the New Orleans Department of Safety & Permits, in a statement. “When construction of the jail was debated and decided back in 2010 and 2011, the sheriff was required to build a prison that addresses the needs of all populations as conditions for approval, including those with medical and mental health needs; the current jail facility is not equipped to do that. Therefore, the City of New Orleans is ordering the sheriff to halt all construction on the project until the city can verify that the sheriff has properly addressed these vulnerable populations in the new jail facility.”

Costing approximately $145 million, the project was intended to house inmates that have been held in makeshift and/or temporary facilities since Hurricane Katrina as well as consolidate and centralize administrative and sheriff’s facilities spread throughout the parish. Housing components include a four-story, concrete-framed building with intermediate mezzanines that will house 1,438 inmates. The building includes 20 double-occupancy housing units with 30 cells per unit. It will accommodate a variety of custody levels and include come open dorms.

On April 17 the City of New Orleans and the Orleans Parish Sheriff’s Office signed a partial settlement concerning sweeping improvements to the prison. These changes — required under terms of a federal consent decree — addressed improvements to both living conditions and management of the facility. Costs for the court-ordered upgrades were then estimated at up to $22 million.

However, the federal courts and the consent decree monitor have both recognized that the new Phase II facility has not been properly constructed to adequately house inmates with medical and mental health conditions, female and juvenile inmates, disabled inmates, or inmates requiring disciplinary and/or administrative segregation, according to the mayor’s statement. Therefore, the City Attorney’s Office has also filed a writ of mandamus lawsuit asking the Civil District Court to require the sheriff to get the new jail into compliance as soon as possible.