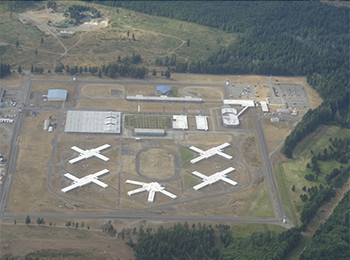 SHELTON, Wash. — Washington Corrections Center in Shelton will soon be the second correctional facility in the country to use a low-tech, but quite effective, method of promoting more peaceful prisons. In addition to offering a variety of education, vocational and sustainability programs, the 1,268-bed male facility will now offer its own version of “The Blue Room,” which first made headlines when it was instituted by Snake River Correctional Institution in Malheur County, Ore.

The Blue Room, developed in conjunction with the Sustainability in Prisons Project at Evergreen State College in Olympia, Wash., offers segregated maximum custody Washington Corrections Center inmates an opportunity to spend their recreation hour watching preapproved nature videos featuring nature imagery such as seascapes and mountain vistas together with audio. The practice is intended to help lower tensions, decrease violent behavior and increase overall safety for both inmates and correctional staff.

The new program shares a name with the original Blue Room at the 3,000-bed Snake River Correctional Institution. That facility’s program was developed with the help of Nalini M. Nadkarni, now a professor at the University of Utah, who gave a TED (Technology, Education, Design) talk on the use of nature imagery in correctional environments as a way to decrease inmate stress and improve safety in 2010. Snake River was the first ever facility to put the idea into practice, despite some initial push back from facility staff. Ultimately, the facility elected to explore the method at a cost of roughly $1,500, which included the purchase of video equipment.

Feedback provided by both inmates and staff showed The Blue Room at Snake River had measurable benefits. A comparison of records gathered on the facility’s Intensive Management Unit (IMU) inmates showed that those not exposed to The Blue Room received more referrals for disciplinary infractions, while those allowed time to de-stress in The Blue Room showed a slight decrease, according to Oregon Live.

The Washington Corrections Center program will differ slightly from that at Snake River, allowing high security inmates to choose to spend their recreation hour using The Blue Room as opposed to using it purely for de-escalation purposes. Prison officials hope that the room’s continued and regular use will show the same benefits found at Snake River. One non-segregation space being tested in part of a special Washington Corrections Center’s unit serving inmates with intellectual disabilities even includes a coat of blue paint and added plant imagery, according to Oregon Live.

In December 2014 the Snake River Blue Room was named one of TIME magazine’s 25 Best Inventions of 2014. Based on the program’s early successes, Nadkarni is now studying the extent to which nature imagery in prisons can change behavior; reduce stress, agitation and anxiety; reduce violence; reduce disciplinary segregation admits; and reduce suicide attempts.