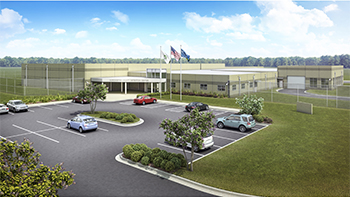 SUMMERVILLE, S.C. — Time and money are two of the biggest obstacles to building new county jail facilities. However, the new 80,500-square-foot Dorchester County Detention Center in South Carolina, is on track for completion an impressive four months ahead of schedule, and rings in at a modest $19.1 million including site work. Originally scheduled to wrap up in July 2016, the project team of Moseley Architects of Charlotte, N.C., and H.G. Reynolds of Aiken, S.C., were able to streamline the schedule thanks to communication, teamwork and wise material choices.

Like many county jail and detention facilities, overcrowding is a constant concern in the existing Dorchester County Jail. The facility is rated to house 156 inmates, but the average daily population hovers around 220 and has climbed as high as 300. The 1950s-era design has also developed numerous maintenance issues, offers just one recreation yard, and storage space has become a makeshift medical department.

Recognizing the numerous deficiencies, Dorchester County partnered with Moseley Architects in early 2010 to conduct a jail and law enforcement needs assessment. It became apparent very quickly that the firm would recommend a new facility as well as a more convenient and centrally located site.

With its new location and a much-improved design, the new Dorchester County Detention Facility will operate under the direct supervision model and include an initial capacity of 352 beds with a 500-bed core. It will also feature a 64-bed direct supervision dormitory for pre-trial inmates and two 40-bed sentenced dormitories for inmates participating in work release. Two maximum-security mezzanine-style housing units, two general population mezzanine-style housing units, and dayrooms complete with video visitation and arraignment round out the secure inmate areas. Secure exterior recreation yards are also provided for each housing unit.

Also contained within the single, free-standing structure are jail administration areas, a magistrate’s court, food service, laundry, booking and intake spaces, juvenile holding areas, bulk storage and a vehicular sally port. The new and improved medical department will feature isolation cells, treatment rooms, a counseling room, and laboratory and pharmacy space. A video visitation room in the public portion of the jail will also be included.

Rehabilitation is a primary goal for the county, and as such each housing unit has its own multipurpose room to host a variety of educational programming such as GED classes or instruction in English as a second language. This goal is also reflected in the facility’s architecture and interior design. Rather than design a cold, austere environment, Moseley Architects tried to the largest extent possible to normalize the environment with large window walls in the dayrooms, and more normalized, almost tropical color palettes in the housing units. Additionally, acoustic absorptive panels lessen reverberations in the dayroom areas, making for a less stressful environment.

Prequalifying construction bidders, performing a thorough needs assessment and using precast products to sped up the building’s drying process significantly sped up the project timeline. These efforts have moved the anticipated completion date up to March 2016, though it was initially estimated to wrap up in July 2016. Training for officers will commence in March 2016, and the county is currently planning to occupy the facility in late May or early June 2016.