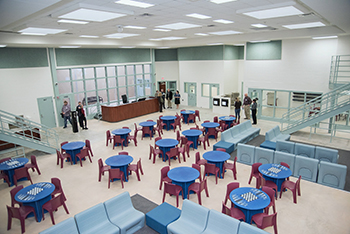 ATHENS, Ga. — A ribbon-cutting ceremony was held on Nov. 13 for the new Athens-Clarke County Jail in Athens. Atlanta-based Rosser International Inc. served as the architect on the new jail, while Augusta, Ga.-based McKnight Construction served as the primary contractor.

The new jail made up a large part of a $73 million project, funded by a 1 percent special-purpose local option sales tax (SPLOST) approved by county voters in 2010, according to OnlineAthens. The total budget includes the cost of bond financing, which was used to get the project started quicker than if the county had waited until SPLOST revenue was sufficiently raised. More than $57 million of the $73 million budget has been spent thus far, according to OnlineAthens.

Not only did the project add 400 new jail beds to the county’s previous 380 beds, it also includes a renovation of the older jail space at the Lexington Road complex. The work at the older jail space will be completed by spring 2016 now that inmates are moved into the new facility, according to the SPLOST program’s Citizen Oversight Committee.

Key design elements for the new jail included the use of modular cell construction to reduce construction time, use of single-cell housing configuration for safe and secure high-custody inmate management, use of dormitory housing configuration for effective low-custody inmate management, and to reuse and renovate the existing jail to maximize bed numbers and increase the program scope, according to Golson Jr.

Athens-Clarke County Manager Alan Reddish spoke at the ribbon-cutting ceremony, noting that the county does not currently need the 780-bed capacity, but that day will come, he said. Clarke County Sheriff Ira Edwards told OnlineAthens that the jail, which holds an average of 10,000 people a year, should meet the county’s needs for the next 20 years.

Edwards said at the dedication that the new facility will have several rooms specifically set aside for inmate programs as well as classrooms and a library. Rehabilitative programs will include anger management classes, job readiness initiatives, help with substance-abuse problems and opportunities to get a high school diploma.

The new jail features a direct supervision model, with most of the jail’s cells and holding areas arranged around central observation stations, reported OnlineAthens. This will allow for correctional officers to observe inmates directly 24 hours a day. The facility was also designed to meet LEED standards, featuring more than 100 skylights as well as special lighting and plumbing controls that will help reduce operational costs.

Golson Jr. said that the biggest challenges involved creating a new jail to integrate with the operations of the older jail. For instance, the architect positioned the new building so that the construction site could be accessed independently from the existing jail.

The new jail was considered for listing in a package of SPLOST projects that went before the public in a 2004 referendum, but county officials opted to keep it off of that referendum due to concerns that its cost would result in the defeat of the package at the polls.