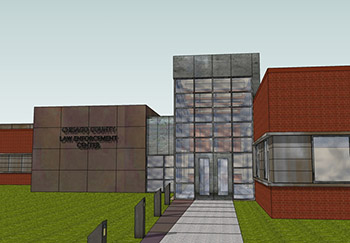 CENTER CITY, Minn. — After weighing the construction of a new jail facility for more than a decade, Chisago County, Minn., correctional officials may be ready to put the project to bid this March. Should the jail project remain on track, bids could be approved by April of this year, with completion in early 2018.

The 25-bed Chisago County Jail, located in Center City, was constructed in 1978 and expanded in 1993, adding 28 minimum-security bunkhouse-style inmate beds. Despite the expansion, a recent assessment found that the jail is undersized by at least 50 percent and that it is operating at 60 percent effective capacity due to its layout, according to a July 2015 report to the Chisago County Board of Commissioners. Antiquated and small intake, nursing and kitchen areas limit efficiency and increase security concerns, while an inadequate sallyport, narrow hallways and poor doorways limit movement and operational capabilities. Master control systems require significant upgrades, and the current facility lacks adequate space for physical fitness activities, library use, laundry facilities, visitation and officer workspace. The aged design also has major functions located in a cramped basement with no elevator and limited access, and water damage is evident throughout.

Early plans for the new jail called for more than 200 beds at a cost of approximately $40 million in the mid 2000s. However, designs have since been scaled back to include just 125 beds for roughly $23 million including land and utilities.

As the county already spends a substantial amount of money annually to house overflow inmates offsite in neighboring county correctional facilities, the investment would save the county money in the long term. Chisago County Sheriff’s Office Captain Brandon Thyen told The Post Review in December that the county houses 20-25 inmates offsite daily, and must also foot the bill for all transportation costs to and from the jail and court appointments. A new facility would eliminate these costs, which average roughly $100 per day per inmate, allowing the county to instead invest in its own correctional infrastructure.

The state Legislature convenes in May, at which time the county will receive confirmation on its request for $12 million in bonding funds, which would support the jail’s construction. Should those funds not be made available, the county may opt for an estimated 3 percent property tax levy.

Speaking with The Post Review, County Administrator Bruce Messelt said that the county has adopted a deferred maintenance stance on the existing jail facility while it waits for word on the new construction. Hence, the facility has fallen further into disrepair, and could require at least $2 million in repairs to keep the doors open if a new jail is not financially feasible. The county has also previously considered a $5.1 million remodel to bring it up to current correctional standards as well as an $8 million addition that would add 10 beds and increase recreational areas.

Chisago County has developed a long-range plan to co-locate the proposed jail and a new law enforcement center in the Center City Business Park. Klein McCarthy Architects, with offices in Minneapolis and Bismarck, N.D, completed design development for the proposed Chisago County Jail and Law Enforcement Center in mid 2015. The design includes administrative offices, patrol offices, investigations and evidence storage. A planned attached garage would accommodate vehicle processing and storage. The county Emergency Communications Center already shares the proposed site and will be connected to the new facility.