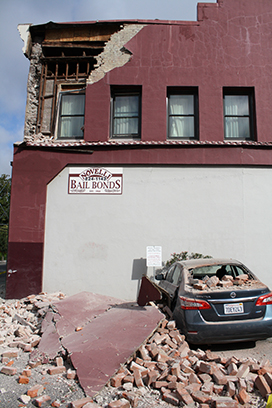 NAPA COUNTY, Calif. — Approximately 18 months after the August 2014 earthquake that rocked Napa County, damaging hundreds of local buildings, county correctional officials are now urging local residents to support a bond measure that would help fund the construction of a new facility.
Speaking with a local CBS affiliate in May 2015, Napa County Corrections Administrative Manager Brett Prebula explained that, while the jail appeared stable from the outside, the building actually sustained significant internal damage during the 6.0 magnitude quake and would need to be entirely rebuilt.
“The safety of our staff and inmates has always been and remains our top priority,” said Lenard Vare, director of corrections, in a statement following the earthquake. “Non-structural damage sustained from the earthquake has created safety concerns and requires the movement of inmates from certain areas of the facility in order for the county to properly assess necessary repairs.”
Compounding safety and structural problems caused by the earthquake, the jail is also struggling with aging infrastructure, a lack of space to support education programming and other services, severe overcrowding, a more dangerous inmate population and a greater incidence of assaults by inmates on officers — all of which were outlined in a 2015 grand jury report.
The jail was first built in 1976 and underwent an expansion 12 years later. However, no new beds or treatment areas have been added in the interim. This is particularly problematic as upwards of 30 percent of the county’s inmates have also been diagnosed as having a mental health issue requiring medication and/or special housing, according to the grand jury report.
Napa County Supervisor Keith Caldwell spoke on the issue at American Canyon’s State of the City event in January, where he called the jail problem the county’s most pressing issue. More than 25 percent of inmate living spaces on the jail’s third floor were deemed unusable following the earthquake, which also impacted programming areas. Dozens of male and female inmates were transferred to the Solano County Jail and the Fairfield County Jail, respectively, in its wake. However, due to the state’s inmate realignment initiative, space is dwindling in county facilities throughout California. Caldwell said that prior to September 2014 the capacity for both Napa and Solano County jails has dropped from 264 to just 204, as reported by the Times Herald Online.
Realignment, Caldwell added, has also shifted more dangerous and violent criminals into county-run facilities, resulting in an uptick in violence toward correctional officers. “Napa County has an urgent need for a new jail,” Caldwell said at the State of the County event, as reported by the Times Herald Online. “Realignment has added many dangerous inmates to inadequate facilities. Officers have been assaulted.”
Ideally, the new jail facility would not only offer more beds and greater classification, but also ample programming and education areas for both individual and group therapy as well as new and larger classrooms spaces, according to Caldwell’s State of the County event remarks.

As opposed to its current downtown location, the new jail facility would likely be located on a 23-acre site near both the Napa State Hospital and Napa Valley College. The county recently purchased the site for $6 million, according to Caldwell. Estimated total construction costs are currently hovering around $200 million. The county hopes to generate $150 million through the proposed county ballot measure in the coming months; the remaining $50 million has already been secured thanks in part to a $17 million jail construction grant.