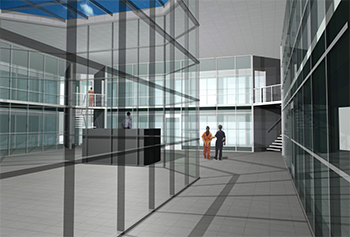 Discussions about the jail began as far back as 1999 when a grand jury report highlighted overcrowding at the county’s current jail, according to The Tribune. The county weighed different options under the assumption that it would have to pay for it. A year after design work began in 2006, however, the state passed AB 900, making funding available to local governments to expand jail facilities to ease overcrowding. San Luis Obispo County received $25 million in funding, which was about 75 percent of the total cost of the expansion in 2008, reported The Tribune. The project was delayed again in 2009 due to the uncertainty in state funding, but with the implementation of AB 109 in 2011, the project gained momentum again, according to Santa Maria Times.

The county jail was originally built in 1971, with the women’s section constructed in 1988. The new jail will be considered separate from the men’s facility, but the two buildings will be connected. The new 46,000-square-foot jail will include a 38,000-square-foot housing unit with 198 beds. It will also provide more space for the facility’s about 20 inmate programs such as computer and life skills, parenting classes, GED preparation and treatment programs.

The first phase will consist of the housing unit and a new electronic security system; the second will include moving the female inmates into the new jail, and the third will consist of tearing down the previous women’s jail and replacing it with an 8,000-square foot medical facility to serve both women and men housed in the adjacent men’s jail.

The design includes multiple occupancy cell space for group gatherings and activities, and it was designed to meet LEED Silver certification. The facility is designed with sensitivity in mind and to look like less of a hardened facility, said Roger Lichtman, AIA, senior vice president, justice lead for AECOM. One of the key features is that the outdoor recreation yard is directly accessible off of the housing unit and meets the dayroom in a way that brings lots of natural light into the space, he added.

Mark Moore, architect for the County of San Luis Obispo, added that direct supervision was a key component in allowing the county to use a smaller area for construction and make the footprint smaller. It also increased the scope to be able to include the medical facility and upgrade the facility in general. The new facility will be able to house maximum-, medium- and minimum-security offenders.

Because the project team had a very small site to work with, they county used prefabricated steel-walled cells instead of the concrete block usually used in maximum-security. That lightened the load, which reduced the cost in the foundation. In total, the facility takes up about 90 percent of the site’s footprint, Moore said.