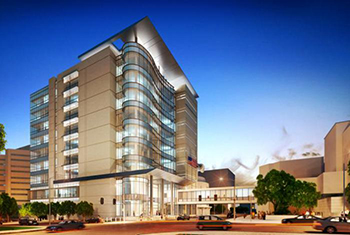 WAUKEGAN, Ill. — In June, construction began on the second phase of the $110 million Lake County Courthouse complex expansion project in Waukegan. The eight-story, 200,000-square-foot criminal courts building will include 12 courtrooms and connect to the current courthouse via an overhead walkway, reported the Chicago Tribune. There will be a holding room on each floor adjacent to the courtrooms, which the current courthouse does not include.

The tower will also connect via an underground tunnel to the Robert H. Babcox Justice Center, which houses the county jail. The Washington Street Tunnel, completed in May as part of the project’s first phase, provides secure and efficient in-custody transfers and allows for secure staff access between the two facilities, according to the project’s website.

The expansion is long overdue, as the courthouse has not had an expansion since the Babcox Justice Center opened in 1989. Not only will it help modernize the courtrooms to have more efficient operations, but it will also help with the growing use of the building. Los Angeles-headquartered AECOM Technical Services Inc. is serving as the architect and engineer on the project, while Bethesda, Md.-headquartered Clark Construction Group LLC is serving as the construction manager.

As of now, the top two floors may remain unused and unfurnished, which would eliminate six courtrooms from the initial design plans, the Lake County Bar Association told the Chicago Tribune. In August 2014, the Lake County Board approved a revised plan to include two floors to be used as shell space. The bar association, headquartered in Waukegan, however, passed a resolution in May that urged the board to keep the original plan of six courtrooms.

While the decision about what to do with the top two floors still remains undecided, the bar association cited several concerns with the courtrooms in the current courthouse. Those include a lack of safety and security for the grand jury and a lack of space for attorneys and clients to hold confidential meetings, not to mention the fact that all criminal courtrooms may not be able to fit into the building without the six courtrooms on the top two floors. Without the extra courtrooms, inmates would need be transported between buildings in a less secure manner, according to the Chicago Tribune.

Crews hope to have the tower enclosed by June 2017, and it is scheduled for completion by May or June of 2018. The third phase of the expansion project will include renovating parts of the Babcox Justice Center starting in 2017, and completion is scheduled for 2019. While no new jail cells will be added, the center will see updates to the intake and booking areas as well as the kitchen and dining areas, reported the Chicago Tribune.

The county is funding the project with 20 percent cash and bonding the balance, according to the project’s website.