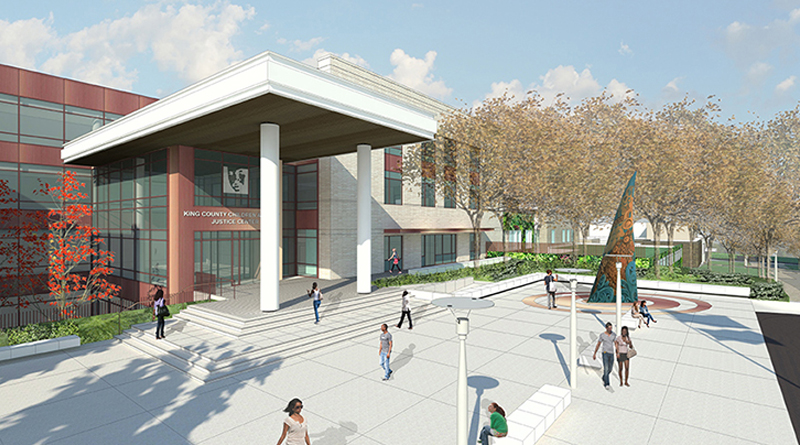 SEATTLE — Despite protests, the Seattle Department of Construction and Inspections approved King County’s request on Dec. 22 for a master-use permit to build the new Children and Family Justice Center that will replace the current youth court and detention center in Seattle.

Leaders say the current youth services center is aging, and its operating costs are increasing, according to the project website. Instead of paying more than $40 million to replace the existing facility’s core operating systems, King County voters passed a $210 million levy in 2012 to build a replacement facility.

Now that the plan is gaining traction, opponents to the project have begun protesting, including a rally outside Mayor Ed Murray’s home two days before the master-use permit decision was made. Opponents say voters were misled in 2012 by a ballot title that didn’t reference detention, and they object to youth incarceration, especially in a county where black youth are more likely to be detained than youth of other races, according to The Seattle Times.

On the day after the rally, Mayor Murray released a statement that said his office couldn’t intervene in permitting decisions. “The city must base any permit decision on the technical design facts in a permit application, and not on any policy considerations,” he said in a statement. “I recognize that significant racial disparities exist in our city and that ultimately our goal is to keep all young people from entering the criminal justice system, and I will continue to direct city resources to ending these disparities in foundational areas such as education, employment and criminal justice.”

The 112-bed project is also inconsistent with a series of reforms and new approaches being implemented to reduce the incarceration of youth. City Councilmember Mike O’Brien expressed disappointment, especially since the project contradicts a council resolution made last year that endorsed a vision of Seattle as a city with zero youth detention.

“Mounting evidence reinforces what communities of color have been telling us for years: Jailing youth perpetuates a vicious cycle of violence, makes detainees more likely to reoffend and disproportionately impacts people of color, particularly black youth,” O’Brien said in a statement.

Locally based Howard S. Wright, a Balfour Beatty company, is contracted to design and build the facility, which will include a courthouse for juvenile court and dependency court, juvenile detention, a 360-stall parking structure and public open areas.

Designed to be LEED Gold certified, the project will feature a green roof to reduce energy use and improve stormwater management, bioretention gardens, an eco-friendly heating and cooling system and other energy-efficient features such as LED lights that will use 26 percent less energy than required by the city’s energy code.

The new center is scheduled for completion in 2020.