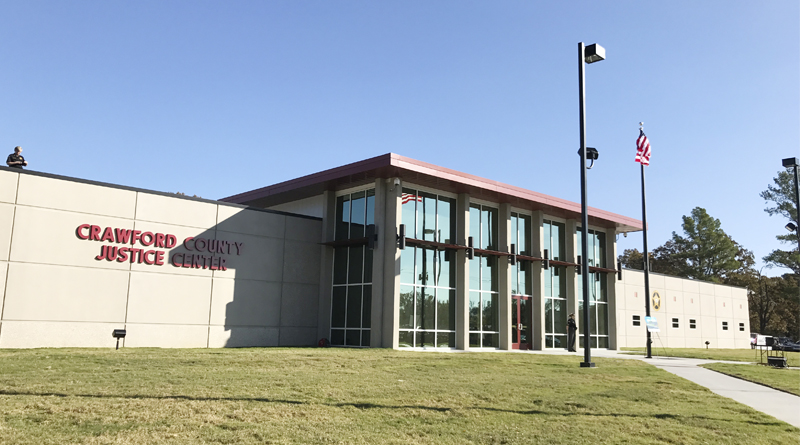 VAN BUREN, Ark. — The Crawford County Justice Center in Van Buren stands as a prime example of how well-built, efficient facilities can really help bring justice back to smaller states across the Southeast. One of the largest justice projects to ever be built in the state of Arkansas (most fall in the 50- to 200-bed range), the new Crawford County Justice Center helps set the standard as more and more counties in the Southeast face overcrowding and dilapidated facility issues.

The county’s previous jail facility opened in 1989 and was initially built to hold 64 inmates before being expanded to hold about 88 inmates. The jail population, however, often exceeded 100 inmates, which forced the sheriff’s office to pick and choose to keep only the most dangerous offenders and release detainees who were brought in for minor misdemeanors. Because the jail was constantly full and these types of releases became commonplace, the citizens knew it and started taking advantage of that broken system — until now.

Crawford County Judge John Hall came into office in 2007 and said the county was in crisis mode back then after already trying to pass three bond issues that failed to produce a new jail. The state put the jail on probation several times and had gone as far as threatening to temporarily close it since it wasn’t up to state standards as a result of overpopulation issues. Judge Hall and Sheriff Ron Brown got together one more time in December 2013 to create a plan that passed a year later and culminated in the Nov. 4, 2016 ribbon-cutting ceremony for the new justice center.

Despite the several years it took to get the project off the ground, the 307-bed facility was completed two months early (in about 17 months) and about $3 million under the original $20.5 million budget. The 64,000-square-foot facility was constructed and designed by SouthBuild TEAM LLC, which includes Smith-Doyle Contractors Inc. of Cordova, Tenn., and SpiritArchitecture Group LLC of Collierville, Tenn.

The facility is divided into 32,000 square feet of inmate housing, while about 34,000 square feet is dedicated to the sheriff’s office, which can accommodate between 60 and 70 employees. Other key features of the new justice center include updated inmate records software, a 911-response center and a first-appearance courtroom that helps minimize inmate movement between the jail and courthouse. The new jail sits on a roughly 6.5-acre portion of a 16-acre site that leaves plenty of room for future expansion.

The new facility is “almost like night and day compared to the previous facility,” said Jim Langford, founder and president of SpiritArchitecture Group LLC. The brick and mortar of the previous facility was at least 30 to 40 years old and featured a first-generation type design that required correctional officers to walk up and down halls in order to supervise inmates. “I call it the Alcatraz design,” Langford said. “[The new facility] is the equivalent of someone coming from driving an old-time automobile to flying an airplane. There are a lot of differences technologically in regard to control and observing inmates and maintaining safety.”

While the new justice center addressed the basic overcrowding concerns for the county, there are two major things that contributed to the success of the project: its design that makes it look civic in nature and the amount of companies that bid on the project, creating enough competition for bids to come in lower and construction time to be proposed quicker.

Early on, a key goal for the project was to create an attractive building that was different than the typical jail style because of its primary location right off of U.S. Route 64 coming into town. Plus, the county didn’t want to build something that wouldn’t fit into the surrounding neighborhood, an area that’s currently under development as the city limits continue to expand in that direction.

The design team came up with three different drawings, and Judge Hall selected the one that was used. “It’s accomplished everything that I’ve asked them to do,” said Judge Hall. He noted that the building now has a “beautiful presence and exterior.”

Langford said that the project team used a modular-type precast for the building, while the front entry is designed in a way to make it look like a civic building with reflective glass.

“It is also designed to minimize the need for extra staff,” Langford added. “In a jail facility, the majority of the costs over 30 years is not in the initial brick and mortar, it’s in the staffing.”

As such, the project team designed the jail to have indirect supervision or what Langford calls “a second-generation approach.” He described the main housing portion of the facility as an apple pie with control points in the middle, giving the master control the ability to look out into the pie slices (or main dayrooms).

While the attitudes in this part of the country are a bit more conservative when it comes to incarceration, Langford said, the facility design meets all required jail standards for the state. That includes multipurpose rooms for GED classes or adult education purposes as the facility deems appropriate.

While Judge Hall had input into how the structure should look from the outside, Sheriff Ron Brown gave input into how it should operate on the inside. He gave feedback on what would work best for his office and employees, especially in regard to communication. “The building has my influence as far as what it looks like, but [Sheriff Brown] decided on how doors and communications work,” Judge Hall said. “It was a joint effort between both of us.”

Located on a 16-acre site, the project team also designed everything with the ability to expand, added Judge Hall. For instance, the washrooms and kitchen are double in size. Essentially, everything was built so that the facility could be expanded to house up to 600 inmates in the future if need be, without needing a revamp. “It’s a structure that will serve today, tomorrow and a long ways in the future,” Judge Hall said.

Langford added that, if the county decided that a full courts building could be added in the future, the project was designed in such a way that it does what it needs to do now but lends itself to expanding if needed. “That was a challenge: having all those functions and traffic patterns cross a countywide communications, public and judicial staff, and making sure they can all access the facility properly and be able to do it in the future after pieces are added,” Langford said.

For more on this project, read the entire article in the January/February issue of Correctional News.