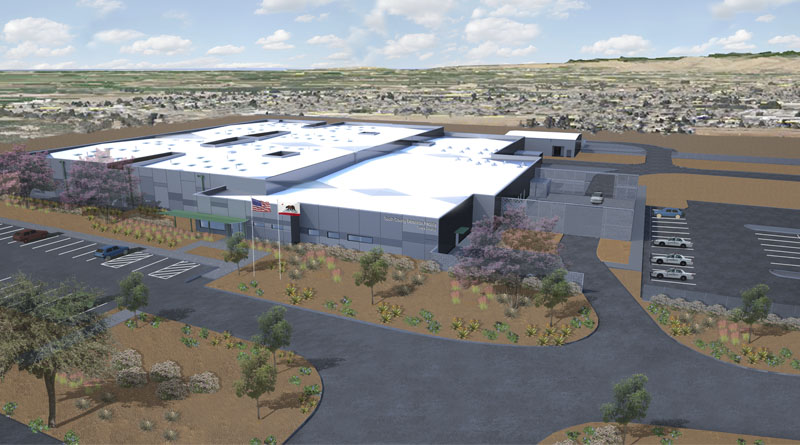 PORTERVILLE, Calif. — The new Tulare County Detention Facility in Porterville is currently in the midst of a major construction project that will house 550 inmates upon completion. Bernards, based in Los Angeles is serving as the general contractor for the new Type II, $54.5 million detention facility, while the Los Angeles office of DLR Group is serving as the architect.

Construction on the project broke ground on June 13, 2016, and when completed in summer 2018 the new detention center will include a laundry facility, medical clinic and a complete food service department with kitchen and dining facilities, according to a statement from Bernards. The project is being funded by California’s AB 900 funds that focus on the construction of health facilities as well as rehabilitation initiatives for state correctional facilities.

AB 900 requires the California Depart­ment of Corrections and Rehabilitation (CDCR) to improve and expand its drug treatment, academic education and other rehabilitative programs for inmates and parolees. For example, the measure includes requirements to increase inmate education participation rates, reduce teacher vacancies, and conduct risk and needs assessments of inmates.

In addition to rehabilitative efforts, the new facility will also likely solve a major issue in the small town of Porterville. Currently, the town only has the capacity to house 11 inmates, thus requiring the county to transfer inmates to neighboring jails, which can be costly and inconvenient for family members visiting inmates.

While the Tulare facility will offer drug treatment and rehabilitation programs, it is also one of the few counties that offers the “Field to Plate” program. As part of the program, inmates can participate in growing produce on the facility’s property and learn about the importance of agriculture, according to McGovern. In addition, the program also allows for participants to raise their own cattle.

Along with the unique programs to be offered at the new detention facility, there are also unique features in terms of the construction and delivery of the project. The project is being completed with prefabricated, steel manufactured jail cells that are being built off-site and then will be transported to the site for erection, according to McGovern. This saves time for the building team and also ensures the highest of quality. The project will also feature a thermal energy storage tank system, which will save the facility money by chilling water at night and storing it in a large tank and then putting it through the air-cooling system of the facility during the day, according to McGovern.

While California is battling extended drought conditions, it would not be obvious to those on the ground of the project. Currently, parts of California are undergoing consistent rainfall, including in Porterville.

“Contractors have not had to deal with rain delay issues for several years now,” McGovern explained. “But now 2017 is turning out to be a very wet year. We need the rain, [but during construction at this time of the year] is proving to be a challenge.”

McGovern explained that although the project has faced weather-related issues, it is on track for an estimated June 2018 completion.