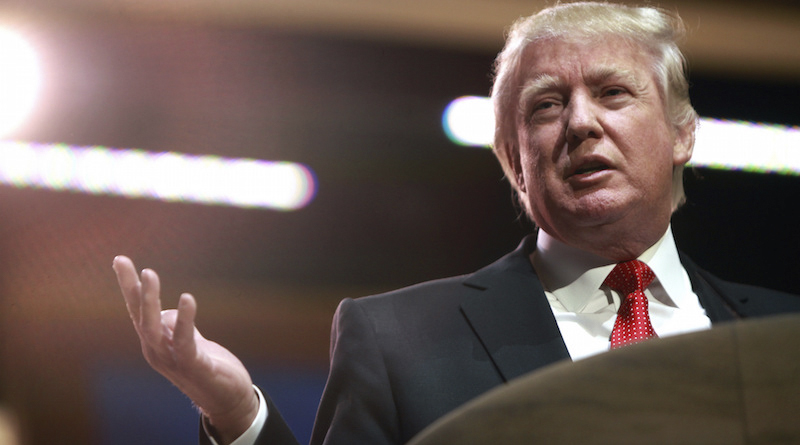 President Trump’s 2018 budget requests $27.7 billion for the Department of Justice, a $1.1 billion or about 3.8 percent decrease in funding compared to the 2017 budget. Photo Credit: Gage Skidmore

WASHINGTON — President Donald Trump’s initial 2018 budget released on March 16 shows that his “tough on crime” attitude on the campaign trail may not have translated to his new budget. While previous statements he made called for longer prison sentences on drugs, indicating an increase in incarceration policies, his proposed budget actually indicates a move toward less incarceration. With prison construction and outdated programs on the chopping block, the budget plan makes way for increased funding to fight terrorism and defense against illegal immigration.

Trump’s 2018 budget requests $27.7 billion for the Department of Justice, a $1.1 billion or about 3.8 percent decrease in funding compared to the 2017 budget. The most obvious indication of this is his $1 billion cut in federal prison construction spending due to a 14 percent decrease in the prison population since 2013. While the budget added $80 million to help with overcrowding at some facilities and $113 million to modernize outdated prisons, these amounts would no way make up for the $1 billion in overall cuts to prisons.

While prison construction is certainly on the chopping block, so are crucial funds classified as “mandatory” such as the Crime Victims Fund and the Assets Forfeiture Fund. The budget plan will eliminate about $700 million in funding to what the administration deems “outdated programs,” including $210 million for the State Criminal Alien Assistance Program, in which two-thirds of the funding reimburses four states for the cost of incarcerating illegal criminal aliens.

While both the Obama and Bush administrations have questioned funding for the State Criminal Alien Assistance Program, it has always survived. Under President Trump’s plan, however, state prisons and county jails would no longer be reimbursed for incarcerating undocumented immigrants, which could be a potential loss of more than $50 million in the state of California alone, according to The Sacramento Bee.

What the budget proposal does plan to do is strengthen counterterrorism, counterintelligence and federal law enforcement activities by providing an increase of $249 million (or 3 percent) in funding to the Federal Bureau of Investigation (FBI) compared to 2017 budget. It also includes a $175 million increase in law enforcement spending to be used to target “the worst of the worst criminal organizations and drug traffickers in order to address violent crime, gun-related deaths and the opioid epidemic,” which has historically led to more aggressive policies that contribute to mass incarceration, according to Vox.

It will also amp up the defense of illegal entry into the U.S. with an increase of about $80 million (or 19 percent) compared to the 2017 budget to hire 75 additional immigration judge teams to “more efficiently adjudicate removal proceedings — bringing the total number of funded immigration judge teams to 449,” according to the budget report. IT will also enhance border security by providing 60 additional border enforcement prosecutors and 40 deputy U.S. Marshals for the apprehension, transportation and prosecution of criminal aliens.

While the details of the budget plan are still quite vague when it comes to corrections, there’s no doubt that major changes are underway.