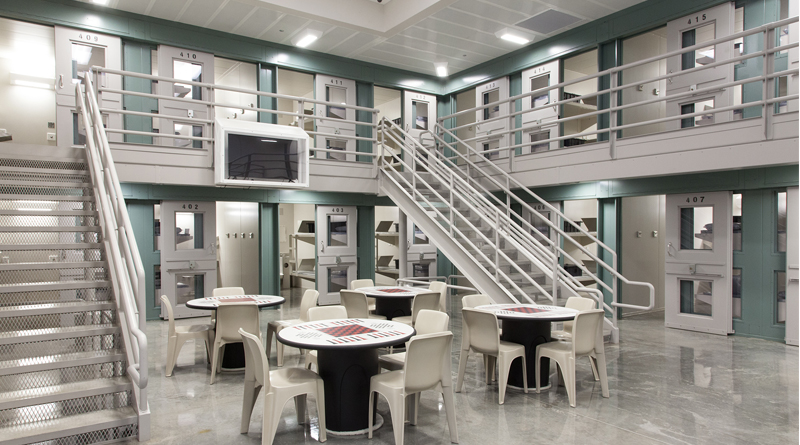 The 192-bed housing complex addition at the Central Utah Correctional Facility (CUCF) in Gunnison, Utah, is just the beginning of a major transformation in the Utah prison system that includes creating more space for inmates. A ribbon-cutting ceremony for the 53,515-square-foot addition was held Dec. 7, even though the project was officially completed a couple months earlier. With the new housing space, the all-male facility now has a capacity of 1,788 inmates.

The state currently has two prison campuses that are undergoing changes. One is located in Draper and is being planned for relocation in Salt Lake City, while the Gunnison facility has had a master plan in the works since before 2008. The economic downturn caused a delay in that plan and what has come from it is the $30 million addition that underwent several changes since its first inception. Los Angeles-headquartered AECOM worked with Salt Lake City-based Archiplex Group on the design of the CUCF addition, while Salt Lake City-based Layton Construction Company served as the general contractor.

In between 2008 and March 2015 (when construction on the addition began), AECOM had a personnel change; therefore, none of the key players who worked on the original project were still involved. In 2013, the local citizens voted to expand CUCF, and AECOM had to scramble to put a design together again, according to Roger Lichtman, senior vice president, justice lead for AECOM.

“Initially, this was a site adaption that was part of the original master plan from before 2008, but we had to make some changes because codes had changed and standards had changed,” Lichtman said. “For operations, the state went to a direct-supervision model, which was a major change that led to a redesign in the shape of the housing units. We could change the interior [design], but the exterior needed to be predominantly the same since it was a prototype.”

AECOM had developed the prototype for CUCF in the late 1990s or early 2000s, so the state of Utah wanted to use the same prototypical design in this new addition. The housing units are designed to be in clusters of four with 192 beds each for a total of 768 beds in each cluster. The new building was the first of a new cluster that leaves room for expansion of three more housing units. Realistically, however, due to water issues and labor accessibility to the site, it will probably be a while before the site is further expanded despite the intent of the master plan, according to Lichtman.

“We could have designed an entirely new building, but it wasn’t what the client was looking for or what we wanted because it wouldn’t suit anyone’s needs architecturally,” Lichtman said. “We worked in the restraints of the original design to make it direct supervision. There were a bunch of energy standards that needed to be met as well.”

The state currently incarcerates about 5,500 inmates in its prison system and grows by an average of 144 each year, according to The Salt Lake Tribune. While criminal-justice reforms could defer offenders with mental illness and drug addictions from incarceration and into treatment programs in the future, the immediate need is to provide more beds to prevent the early release of inmates.

As such, the goal of the addition project was to provide more beds for the growing offender population as well as replace units at the prison that were beyond repair, said Steve Turley, director of special prison projects with the Utah Department of Corrections (DOC). That included creating a new supervision and offender management philosophy for the state to achieve positive inmate behavior and successful inmate transition to the community as well as ensure staff and offender security and safety. The prison originally opened in 1990 with its Henry facility and added the Boulder housing facility in 1998, according to the DOC website.

“Many prisons and jails across the nation are adopting a direct-supervision model within their facilities,” Turley said. “Statistics have shown a reduction in inmate-on-inmate assaults, inmate-on-staff assaults and fewer PREA issues.”

Even though the concept of direct supervision has been around for about 40 years, the state of Utah made a significant push to incorporate it into this design as well as the new Draper prison facility currently in the works. The CUCF addition features four pods, each designed with cells along two walls and a common area in the center. At one end of the pod is a station with a computer terminal for a corrections officer, where he or she can provide supervision each day.

For more about the CUCF project, read the entire Facility of the Month story in the March/April issue of Correctional News.