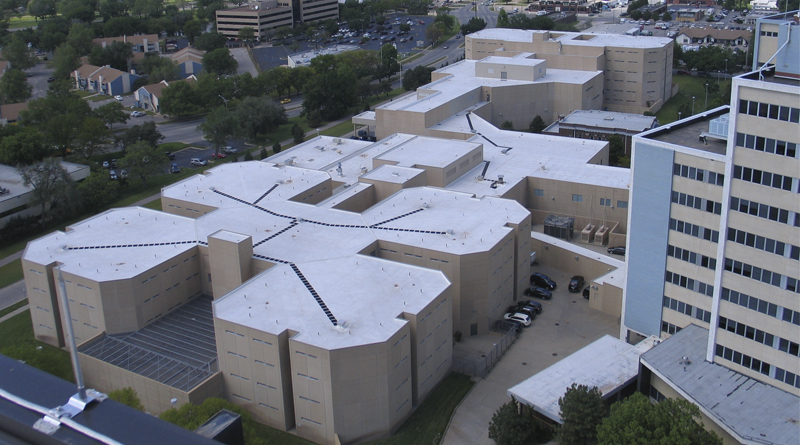 WICHITA, Kan. — The Sedgwick County Adult Detention Facility in Wichita recently underwent a massive upgrade and replacement of its existing jail security system, valued at more than $5 million. The 468,000-square-foot facility is the state’s largest jail and was severely lacking an adequate and up-to-date security system — which is a critical element for any correctional facility, let alone a 1,158-bed county jail. The replacement of the jail’s security system initially began on Jan. 4, 2014, with completion on May 22, 2015. The estimated completion for all security upgrades, including updates to the county’s work-release center is scheduled for September 2017.

The security system upgrade at the Sedgwick County Adult Detention Facility is one of the largest single-site security electronics upgrades for the county in the past few years, and one of the most complex projects ever undertaken by many of the project team members, according to Jeff Pronschinske, security practice leader at Wauwatosa, Wis.-based Mead & Hunt, the engineering firm and consultant on the new security electronics system for the project, provided by Fishers, Ind.-based security electronics contractor Stanley Security. The project is also the largest and most extensive project that the jail has undergone since the expansion of its north tower back in 1998.

The security system upgrade was part of a broader project that included the replacement of millwork in the inmate housing areas, new equipment rooms and a new master control room, according to Adam Kuehl, associate at Overland Park, Kan.-based HMN Architects, who worked on the design of the project, while locally based Compton Construction Corporation served as the general contractor. The project also included replacement of more than 200 obsolete and malfunctioning detention locks. Although the master control room and upgrades at the jail have since been completed, HMN is also working on the current project at the county’s work-release center, located just a few miles up the road from the Sedgwick County Adult Detention Facility.

The main goal of the jail’s security project was to introduce a modern, easy-to-maintain, staff-efficient, nonproprietary system that will increase safety and replace deteriorated control stations, according to Kuehl. In addition to the master control room upgrade, the team also worked on the jail’s 22 control stations located throughout the housing pods, where the facility uses both direct and indirect supervision.

“HMN developed a control station, which we have used on multiple projects, constructed of a solid surface that is extremely durable, easily maintained and provides an element of safety,” Kuehl explained. “Every monitor, computer, owner-specific system and minor detail right down to a custom razor-blade management system was accounted for in the millwork design.”

The new security system was necessary in order to keep the jail functioning safely and operating according to 21st century standards, according to Pronschinske.

“The original security electronics system had far outlived its useful life and was in disrepair and failing. Replacement parts were no longer available to service the existing equipment, which sparked an immediate need for a full-system replacement,” Pronschinske explained.

The original security electronics system at the Sedgwick County Adult Detention Facility comprised a combination of manual dipswitch door control panels at the pod officer control stations and a non-graphic DOS-based remote door control system at master control, according to Pronschinske. The facility also operated with analog cameras and reviewed coverage on small CRT monitors, offering image resolution that was blurry at best. The upgrade to the security system also doubled the amount of cameras at the jail, from about 200 analog cameras to now 450 digital cameras. Prior to the project, staff members were not able to identify faces on camera but instead only recognized the color of an inmate’s jumpsuit. The previous system also left plenty of room for incidents to slip through the cracks, as staff members were not able to record video. This meant there was no digital record of any wrongdoing (from an inmate or correctional officer) when incidents were reported, according to Sedgwick County Sheriff Jeff Easter.

Sheriff Easter was elected to the position right before work began on the replacement of the jail’s security system back in 2014. While there was reason for project team members to be concerned — given that a new sheriff could mean a new agenda — Sheriff Easter said that he trusted the hard work of those involved to get the project moving and didn’t want to disrupt years of planning.

“When I first came on as sheriff, I was brought up to speed on the project and I learned how inadequate our systems were compared to newer jails,” Sheriff Easter said. “We had about 200 cameras at the time and none of them recorded video, and I found that very hard to believe that, in a jail setting, we didn’t have any cameras recording.”

“[The new system] really helps [us] reduce and handle complaints better because we can go in and say, ‘Well, look at the video,’” Dietzman said. “It is way more efficient, helps us do our job better and, as a result, people are safer.”

Sheriff Easter echoed Dietzman, and said that overall complaints have been down since the new cameras were installed. In addition, safety has also increased since deputies are now able to monitor a clearer picture of the pods and corridors.

“Capturing real-time, clear video coverage helps especially if there’s a fight somewhere, because we can then get people through the facility quick to get help, which is really important because seconds matter in those kinds of situations, whether its an inmate or a deputy,” said Dietzman.

Read the full article in the May/June issue of Correctional News, which can also be found online here.