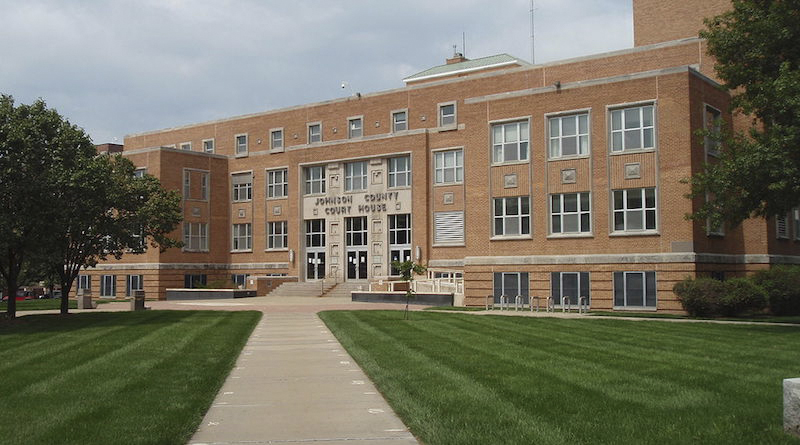 The existing Johnson County Courthouse will not be demolished until the new one is completed.

OLATHE, Kan. — Plans for a new Johnson County Courthouse, to be built directly north of the existing one, are underway in Olathe.

As of June 1, the county began reconfiguring its courthouse square, even deeding over one of its office buildings to the city of Olathe, according to The Kansas City Star. The city’s current information technology office will be torn down to make way for the new courthouse, therefore requiring employees to transfer to the newly deeded office building. The county also plans to purchase two homes and another commercial building on the site where the new courthouse will be built.

Expected to take four years to complete, the new courthouse project is currently in the design criteria phase, with a groundbreaking scheduled for mid-2018 and completion scheduled for 2021. The existing courthouse will not be demolished until the new one is completed.

Correctional News spoke with Stephen Carter, AICP, a Columbia, S.C.-based executive vice president and global strategic development officer for CGL Companies, the criteria architect on the project. Carter weighed in on the key goals the project plans to achieve upon completion.

Q: Can you share any specifics of the design?

Carter: CGL was selected to be the criteria architect, and as such, is preparing the documents that will be used to solicit a design-build team to implement the building program over the next three years.

Q: What are some of the challenges that the project will have to face to achieve completion?

Carter: A major aspect of the project is to maintain the values of people befriending people in a facility type that is becoming far more “hardened” than folks in Johnson County want in public spaces and buildings. Contemporary courthouses are, as the National Center for State Courts suggests, a unique combination of “a temple of justice and a legal emporium.” Security for staff, litigants and citizens is critical, but so is the role of the courthouse as the iconic representative of justice in the county. A major challenge will be finding the balance, remembering all the while that this is Olathe, not St. Louis, Miami or Los Angeles.

Also of note, Johnson County is home to a sizeable communications and insurance economic base and is one of the Midwest’s more affluent communities. In contrast to a high-tech and high-income base, large parts of the county remain rural in purpose and attitude. A courthouse must reflect the values of all her citizens.

As with any project in today’s building climate, the steady increase in building costs will be a challenge to bring the project in within the bond issue amount (approximately $200 million in total cost).

Q: How does this project compare to ones you’ve worked on in the past?

Carter: The courtroom floors are similar to many contemporary arrangements reflecting the required public and private circulation and appropriate meeting and waiting spaces for visitors, litigants and staff. A unique aspect of this project is the emphasis placed on engaging the community on the ground level. The new Johnson County Courthouse will be “community-facing” and “community-engaging.” Therefore, a lot of space is being dedicated to helping citizens resolve issues within the spaces and through the services at the ground level — in effect, the “legal emporium” aspect of the courthouse.