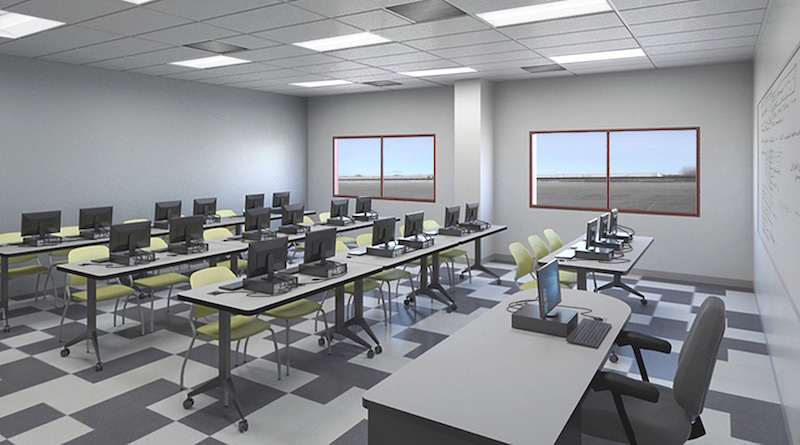 One building in the training center will serve as a 10,000-square-foot, seven-classroom building that will include administrative spaces and a computer lab.

FAIRFIELD, Calif. — Solano County is changing the way it offers programming to inmates with the construction of a new $25.85 million Classroom and Vocational Training Center underway on the 29-acre Claybank campus in Fairfield, which already houses the Stanton Correctional Facility and Claybank Detention Facility.

The training center will consist of two buildings in addition to a 600-square-foot area for truck- and bus-driving training, and is in line with California’s Assembly Bill (AB) 109, created to reduce the state’s prison population. It follows the national shift that includes better programming opportunities by providing long-term inmates with an opportunity to learn a vocational skill.

One building will serve as a 10,000-square-foot, seven-classroom building that will include administrative spaces and a computer lab as well as two external holding cells, according to Gordon Rogers, AIA, LEED AP, executive of the Engineering and Architectural Services (EAS) department for Sacramento, Calif.-based Kitchell, the architect on the project. The other building will serve as a 30,000-square-foot vocational training facility that includes eight flexible “trade” bays that vary in size as well as four shared classrooms. The county reported that they plan to use them for training in trades such as automotive/mechanical, electrical, carpentry, welding, sheet metal and plumbing.

“Our goal is to take AB 109 inmates who will be with us for a long time and get them off drugs, get them educated, and if we can provide them the skills to get a job after they’re released, then they won’t come back,” said Solano County Sheriff Thomas A. Ferrara.

Sheriff Ferrara added that the county’s big push includes diesel mechanics in addition to bus- and truck-driving school. The county is even partnering with Michael’s Transportation, a transportation company located in the nearby city of Vallejo, which has a 90 percent placement rate to help inmates get employed at the end of the program.

“The primary focus for the facility was to allow for future training and education flexibility,” Rogers said. “Solano County wants a facility that would evolve with future labor and workforce needs in their community. To meet that goal, the project architect and the county met with local labor and education leaders to better understand current trends.”

While the facility certainly follows the national trend in offering a more rehabilitative approach to corrections, it’s still being designed with security in mind. Both buildings are considered “free-exit” buildings — in which inmates are capable of leaving the building without assistance from correctional staff — surrounded by a secure fence that is built immediately adjacent to the county’s recently completed Stanton Correctional Facility, according to Rogers.

“[The classroom and vocational center] is similar to other correctional facilities in that it includes site entry and exit security; however, the biggest similarity is that both types of facilities need to be constructed with durable materials,” Rogers said.

Solano County Lieutenant Daniel Castillo added that the facility’s key design elements incorporate both the security and custody setting to ensure that the public feels a sense of security, while also introducing a new programming model. The buildings are made of metal and feature solar panels on top. For the interiors, the project incorporates new technologies such as camera and security systems that will create more efficiencies for staff and lower the cost of operations. For instance, the county is using tablet devices remotely so staff members can walk around and get jobs done while also supervising from the ground, according to Lt. Castillo.

Construction is currently underway and is expected to take about 18 months, with the project scheduled for completion before the end of 2018.

To read the full article, check out the May/June issue of Correctional News.