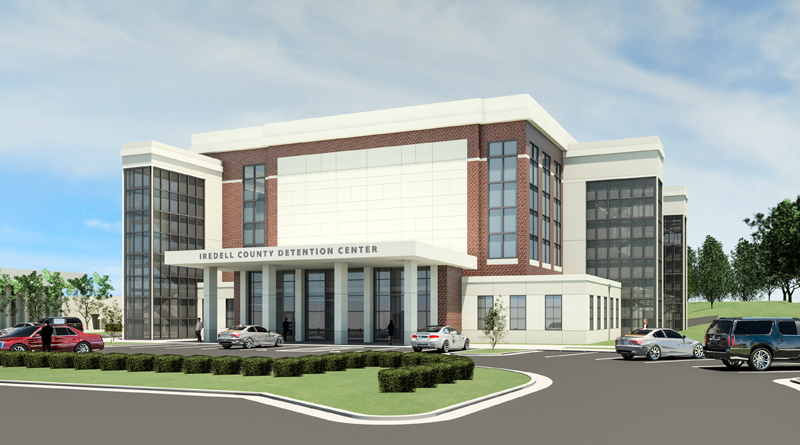 STATESVILLE, N.C. — After many phases of development and planning over the past seven years, construction for the expansion of the Iredell County Detention Center in Statesville is on track to begin in mid-September. Master planning includes phasing out the 1970s-era jail housing unit and replacing it with updated spaces with a larger holding capacity.

Moseley Architects of Charlotte, N.C., is serving as the architect on the project, with Hickory Construction Co., of Hickory, N.C., serving as general contractor. With the project now bid, the budget will be $25 million plus another $677,393 for add alternates, all of which were accepted. The project is slated for substantial completion by February 2019.

The project was initially bid with a construction manager at-risk (CMAR) delivery method, but the bids came in higher than expected, according to Dan Mace, principal architect in charge of the project. The project was rebid with a standard design-bid-build procurement, and bidding came in significantly lower as a result. Reasons for this were unclear, but some speculation was made that subcontractors may be more selective in the current market, according to Mace.

Expansion on the 82,000-square-foot facility includes 300 new beds, with a core space for 500, bringing the capacity of the jail up to 700 from its current 277. The project will include new core spaces such as intake, booking, kitchen, laundry and property storage to handle the county’s growth for the next 25 years. The project also includes converting the existing booking and intake area into a new medical suite. Plans for the project include building the new intake and holding cells section, and once completed, the work on converting the previous booking and intake into the medical suite can commence, according to Mace.

Given that the historic downtown environment of the site is adjacent to the existing justice complex — which includes the current courthouse and the old jail — the design team wanted to respond accordingly “in a respectful manner” in regard to aesthetic design. The expansion is visually designed with a precast and face brick glazed spandrel, natural glass and steel mesh to provide compatible context to its surroundings, according to Mace.

“We’ve had a very supportive county commission and county leadership, including the sheriff and chief deputy that were highly engaged in the entire design and planning process,” said Mace. “This is critical to a successful project.”

The new facility has a “midrise” or “stacked design approach” with core spaces on the ground level to include video visitation, a public lobby, training space, kitchen, laundry and intake booking. Housing levels are stacked in two levels on top of the lower level and consist of indirect podular housing units made of steel modular cells and rear plumbing chases that meet North Carolina jail standards, according to Mace. Each housing unit has a dedicated multipurpose room for classrooms, programs and clergy, designed to help reduce recidivism. Dayrooms have enhanced natural daylight, bringing in natural light from the end wall of each dayroom area.

“The rise in medical issues that are currently prevalent in correctional facilities makes this expansion particularly relevant,” said Mace. “We are seeing a huge increase in mental illness and drug dependency with U.S. inmates, which has an impact on medical and reformative abilities that jails need to have in order to prevent the return of the inmates after release.”