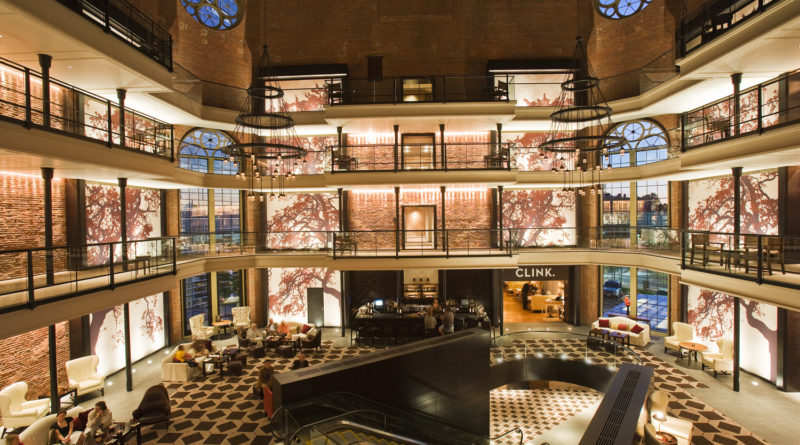 Boston's Liberty Hotel is a decommissioned prison. Originally the Charles Street Jail, it's now a haven for hip travelers.

With all the chatter about overcrowded prisons, it’s odd to consider that correctional facilities are regularly shuttered. Sometimes a new facility obviates an older one, or crime has dropped so significantly in a certain area that the cells are superfluous. Whatever the reason for a prison’s closure, the sizable square footage and historic provenance shared by these facilities can make developers drool.

In what we might call the ultimate in sustainably reusing and repurposing existing infrastructure, some decommissioned prisons retain their original aesthetic and become, say, film studios. But more ambitious projects have caught the interest of such tony publications as Architectural Digest for not only repurposing an existing prison footprint, but doing it with style. Consider the recent efforts of international architectural firm OMA New York, which won a competition to morph a Dutch prison into a 1.5 million-square-foot development. As profiled by the digest, the project will eventually feature 1,350 residential units, ranging from rentals to luxury condominiums (with a third earmarked for affordable housing).

According to the profile, the former central prison building will be transformed into a design and arts center. Furthermore, the complex will boast a restaurant, a health center, a school, a variety of park spaces and an underground parking lot to boot. Construction is scheduled to begin in early 2018.

For those interested in more temporary accommodations, there’s Boston’s aptly (or perhaps ironically?) named Liberty Hotel. One time known as the Charles Street Jail, the site housed inmates for 140 years before its renovation into a luxury hotel. Though elements of the building’s original 1851 design remain like its signature brick walls, the interiors have been reimagined to suit the tastes of the modern, urbane traveler. Located at the foot of Boston’s historic Beacon Hill district, the Liberty Hotel is national historic landmark with 298 rooms and suites as well as cheeky nods to its original purpose — for example, one can enjoy a drink at the Alibi bar or dine at CLINK restaurant.

Meanwhile, in Melbourne, Australia, erstwhile Pentridge Prison is becoming the stylish residential development soon to be known as One Coburg Quarter. Eighty-one, one-bedroom apartments and 67, two-bedroom designs (most with two bathrooms) will be coming online and all feature spacious floor plans that take advantage of natural light via floor-to-ceiling windows festooned by terraces. Moreover, there’s a planned residents’ bar and lounge and a rooftop with a barbecue.

“One Coburg Quarter is a gateway building both literally, as it allows access through the 19th century wall, and figuratively, as it heralds the beginning of a new era for a new northern village,” developer Ben Anderson told Weekly Times Now, an Australian news service.

Aussie architecture juggernaut Rothelowman is leading the project design. Construction on One Coburg Quarter is due to finish in June 2019. At prices beginning at about $290,000, certain buyers might feel feel an affinity for the development’s former residents — after all, it’s a steal.