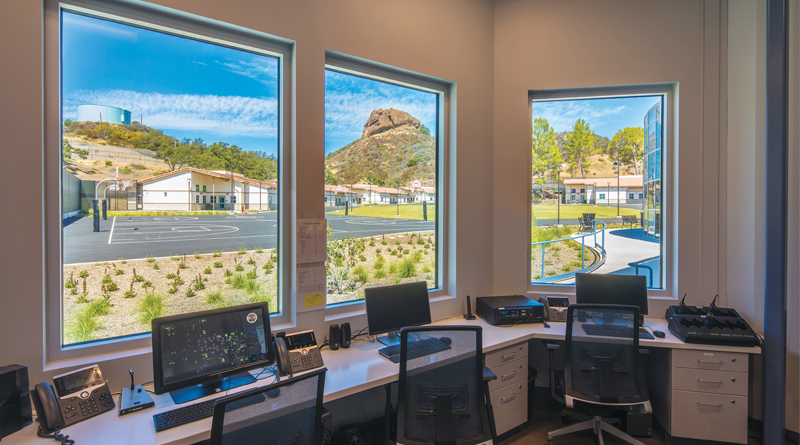 The control room on the public side has sliding windows, which gives the ability for staff and the public to have interaction. Photo Credit (all): Chip Allen

Los Angeles County’s Campus Kilpatrick opened its doors to juvenile inmates in July 2017, providing a school campus–like atmosphere intended to have a positive impact on juveniles and society at large.

“This is truly a community-based, long-term solution that’s hopefully going to have a huge impact on the life of kids in L.A. County,” said Andrew Cupples, AIA, principal and global justice design leader for DLR Group, the architect on the project based locally.

Nestled in the Malibu Hills outside of Los Angeles, the juvenile justice center acts like a full school for the about 80 juvenile offenders it houses on average (even though its capacity is 120). Construction on the project began in October 2015, and locally headquartered Bernards served as the general contractor in partnership with DLR Group on the design-build project.

Campus Kilpatrick was designed to be just that: a campus. All project stakeholders — Probation, Education, Mental Health and the Department of Public Works — actively worked on developing a vision for a new paradigm for juvenile justice that emphasized treating youth offenders.

The juvenile justice center provides housing and program space for moderate- to high-risk juvenile offenders. It’s highlighted by housing in five residential cottages — each of which is a duplex unit with two, 12-bed housing areas. Each cottage includes laundry, admin and support, and counseling as well as recreation areas and group living spaces to further encourage sharing and friendship. Across from the cottages is a student commons for dining in addition to a pool, basketball courts and library that make the facility a functioning campus. The idea being that the campus will foster a culture of care that allows juveniles to succeed and avoid returning to the corrections system.

“This is a gentler, more therapeutic small-group setting that we call the L.A. Model to provide an environment where the kids can be rehabilitated and treated,” said Vince Yu, capital projects program manager for L.A. County Department of Public Works. “It will help them create a new vision for their lives so that they don’t need to recycle through the system anymore.”

What L.A. County has dubbed the “L.A. Model” is technically a variation of the Missouri Model, a juvenile justice reform model created in the state of Missouri that has proven successful over the last 30 years. (For more on juvenile justice design, turn to pg. 40.) This latest variation was developed by the L.A. County Probation Department to help improve outcomes for youth, the community and society by offering small-group living and program settings that emphasize education, vocational skills and intervention in an effort to reduce recidivism.

When taking on the Kilpatrick project, L.A. County wanted to focus on addressing concerns regarding treatment of juveniles in the system and addressing what that system should look like in the future, according to Cupples. “It became about this notion of ‘care for all,’” Cupples said. “Creating a new facility became a way to totally envision the system in an effort to help reduce recidivism for juveniles and help keep them out of the adult system.”

Totaling 65,000 square feet, the juvenile justice center replaces a 50-year-old juvenile detention facility. In fact, most of the current juvenile facilities in L.A. County date back to the 1960s and 1970s, and their designs were driven by the philosophy of custody and control. In these facilities, juveniles wear uniforms, walk in a single line and are managed under more of a boot-camp philosophy.

“In contrast, the culture of care starts with the fact that most of these juveniles have a huge history of trauma,” Cupples said.  “Ninety-three percent have at least one or more traumatic experiences, with higher rates of post-traumatic stress disorder than soldiers returning from Iraq, according to background information developed by the Department of Probation. The old L.A. model just extended that trauma.”

L.A. County’s adaptation of the Missouri Model ensures a small, safe, youth-focused and community-oriented facility that’s based on a philosophy that emphasizes care in custody, more than control, in an effort to help kids succeed. One of the first implications of this: the students wear their own clothes as an incentive, and staff does not wear probation uniforms.

“The L.A. Model takes the Missouri Model one step further and adapts the way we do business,” Yu said. “Kids in the Missouri Model stay together and eat together in the same residential building. We work with the L.A. Office of Education to maintain a school at the facility. It’s important that we make sure they get used to the idea of going to school.”

At Campus Kirkpatrick, that means juveniles stay together in the housing units, but then go to school just like typical students their age would. It’s designed to build trust between staff and juveniles by starting with the housing units that focus on small groups, allowing for constant supervision and interaction, Cupples said. The new campus doesn’t even have one strand of razor ribbon because the security is transparent.

“The key was to create an open campus,” Cupples said. “Right beside the 12-bed housing areas, you see the support building, and across the yard is the commons. This was a design-build delivery, and originally the county planned to use the gymnasium for dining, for visiting and just about everything, but we worked with Bernards to include a more welcoming student commons instead as the heart of the facility.

“What we did was create a much more normative environment, like the typical California school around a courtyard,” continued Cupples. “The student commons is for dining and visiting and is even supported by a culinary arts program. [The facility] acts like a full school and was designed with the intent to be integrated as a school to offer a more normal day with 24-7 programming for kids.”

That programming allows the kids to engage in typical high school classes such as arts for incarcerated youth, a culinary arts program, intramural sports and other vocational training. Anticipated for a January 2018 debut, the culinary arts program is a big component at the facility with a full commercial kitchen for juveniles to learn to work. A gymnasium with real-wood flooring and even a theater add to that, and future plans call for adding a garden to the site to produce food, which is currently in the very initial feasibility phase, according to Yu.

“[The facility] is almost like a mountain retreat, with high ceilings and an airy environment,” Yu said. “I wouldn’t mind spending some time there myself. It’s such a nice setting, and we believe we provided the right setting for healing.”

Check out the entire article in the September/October issue of Correctional News.