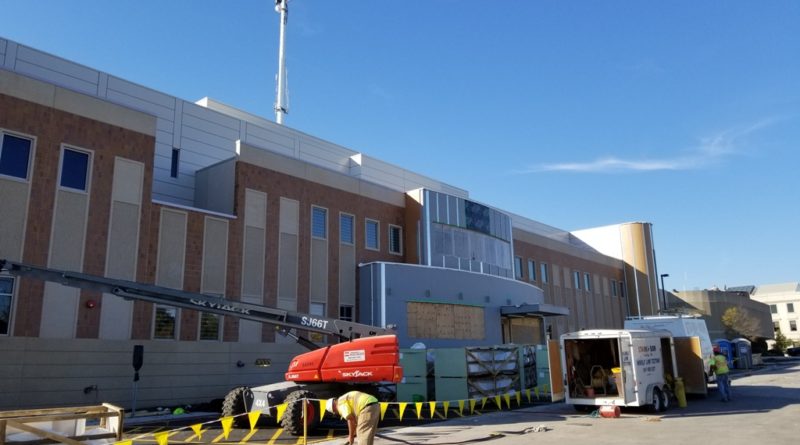 Still under construction, the expansion of the Dekalb County Jail is expected to be completed by Jan. 23 of 2018. Photo Credit (all): Dekalb County Government

SYCAMORE, Ill. — As of the last week of October, the expansion of the Dekalb County Jail in Sycamore was 80 percent complete. The current expected completion date is now Jan. 23, 2018 — months sooner than the originally projected completion date of spring. At this rate, it is expected that inmates could be housed beginning in July 2018.

Dewberry Architects of Elgin, Ill., have been serving as the architect on the project. The $36 million expansion broke ground in June 2016 and has run on time due to favorable weather conditions throughout, according to Gary Hanson, DeKalb County administrator, in a recent interview with the Northwest Herald.

The expansion is the jail’s first renovation since it was originally built in 1980. The expansion will nearly double the space of the jail from its original 46,481 square feet to 83,630. In addition, the expansion will increase the jail’s capacity to 153 from less than 90 beds solving a decade-old overcrowding problem. The current jail’s average daily inmate population is 141 so far this year — the highest in the jail’s history.

In 2016, the average inmate population was only 113. In 2017, already the population has increased to up to 155 inmates on some exceptionally high days. The addition should allow enough space to house the average of 30 to 50 Dekalb County inmates who are ordinarily held in other counties’ jails due to the unlimited bed space at the DeKalb County Jail.

“We needed this renovation 10 years ago,” said Joyce Klein, Dekalb County chief of corrections, in the interview with the Northwest Herald. “We’re very excited to get in there. It’s so important for us to have the core areas and housing space that we’re going to get with this build.”

The jail expansion will feature new cells, isolation rooms, a kitchen and medical facilities. In addition, there will be a new laundry area as well as meeting rooms and other supportive spaces. Plus, safety features will also be added to the new building, including well-lit parking lots and a black, vinyl fence for the inmates rather than a razor or barbed-wire fence.

Other new features for the updated jail will include a large booking area with separate cells from the general population, and the brand-new kitchen will feed up to 300 inmates. The new laundry room will have three washers and three dryers — an upgrade from only one washer and dryer at the current jail.

Inmates also will be able to use a new recreational facility, a space that doesn’t exist in the current jail. The county has not yet decided what will go inside the new rec center, but thought is being given to building a half-court basketball court along with planted workout machines, such as pull-up bars.

In addition to the new upgrades for inmates, jail staff will also see some improvements. The jail had to remove break rooms and convert them into cells in the past due to the space/capacity problems, making it a challenge for staff — guards, counselors, nurses and doctors — to take a break throughout work shifts. The new facility will provide break rooms, locker rooms and personal desk space, in addition to an outdoor break patio located on the second floor.