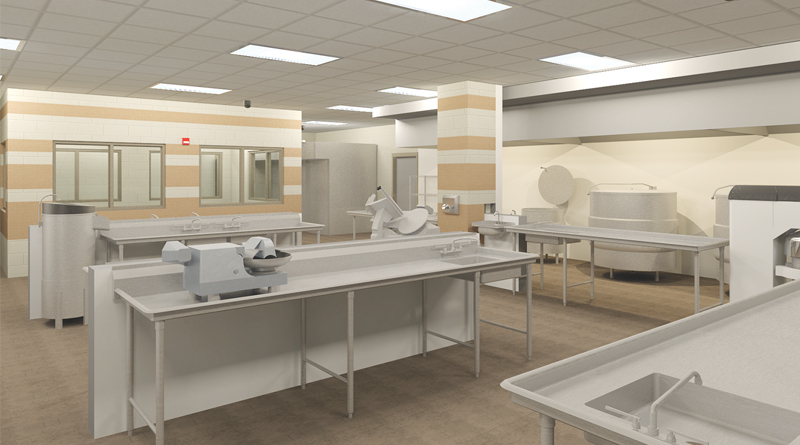 SHIRLEY, Mass. — The Massachusetts Correctional Institute (MCI) in Shirley is currently in the planning stages for a new 1,400- to 1,500-person kitchen and dining complex that will replace the old one. The new dining complex is being designed to at least LEED Silver in accordance with state standards, in order to create greater energy efficiency for the institution.

Renovations on the 18,500 square feet of kitchen and dining space will be accomplished with a $12 million budget. SMRT Architects of Andover, Mass., is the architect designing the project, which is expected to go out to bid by the end of November. Construction will likely begin sometime in spring 2018, with a projected 20-month construction schedule, according to Arthur Thompson, principal architect at SMRT. The existing space was built from modular components in 1991 and has “outlived its usefulness physically” and “falls short” from a design and operation standpoint in relation to security, safety and efficiency, according to Thompson.

MCI Shirley currently serves approximately 1,220 inmates with a capacity for more and is primarily medically based with 30 to 40 percent of the inmates using medical devices such as walkers. The median age of inmates is currently in the 60s, according to Thompson.

“When the Commonwealth of Massachusetts decided to replace the current food services at MCI Shirley, they wanted to be as aggressive as possible at making the building sustainable,” said Thompson. “SMRT’s design has met the standards of Executive Order 484 calling for a LEED Silver–plus approach and meeting Americans with Disabilities (ADA) and Massachusetts accessibility standards.”

To help in this area, the design team has been working with Lori Schroeder at Bolingbrook, Ill.-based S1 Food Consulting Services, who has been “indispensable” to the success of the design process, according to Thompson.

As such, the motivation for a LEED Silver kitchen and dining hall was the logical next step. Large, institutional kitchens are utility intensive, with most energy use coming from the kitchen, and provide their own challenges for sustainable design, according to Thompson. After a thorough building life cycle cost analysis of SMRT’s proposed systems for the facility, the design team determined a 5.2-year payback.

The building has most of the features included in modern sustainable construction such as high levels of insulation, tight envelope design and a non-reflective white roof — but most of the big savings are in the systems and equipment, according to Thompson. A dedicated digital building control system manages all of the building systems keeping the building in balance. There are high-efficiency gas-fired heating and direct expansion cooling roof-mounted air-handling units throughout the building. These units heat and cool the building through a variable air volume (VAV) system with energy recovery wheels.

The new kitchen and dining hall will have all LED lighting, both interior and exterior. While LED lighting has become fairly standard in most modern design, the efficacy and impact of LED lighting in a correctional facility is paramount, according to Thompson. In addition to offering a long lifespan, low-maintenance light fixtures offer sustainability from a staffing and security perspective and are of “tremendous benefit.” All LED fixtures will have at least a 50,000-hour life and 20 years of typical use.

Additionally, the kitchen and dining hall will include an energy-recovery system, dual-technology occupancy sensors, daylight harvesting and dimming technology for all lights and motors — as much as possible. “While these are systems that can save significantly on energy, the design team was strategic about the location and use of occupancy sensors and dimming technology, as inmate-occupied spaces need to be lit at all times for security reasons,” said Thompson.