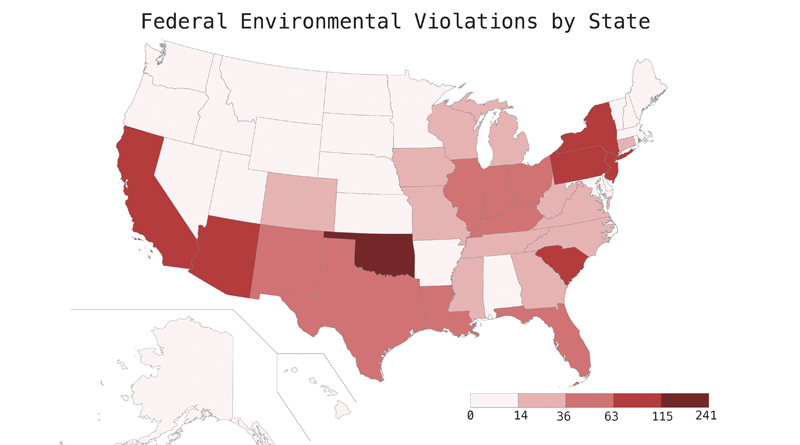 WASHINGTON — The Environmental Protection Agency (EPA) recently added a layer to its online Environmental Justice Screening and Mapping Tool (EJSCREEN) that displays the locations of American prisons. This new layer of the existing tool shows the position of prisons relative to potential environmental trouble zones.

Before the new layer was added to the tool, EJSCREEN was intended as the EPA’s mapping tool to understand the health impacts of poor environmental conditions on the most vulnerable populations most likely to suffer from industrial pollution and exposure to contamination — primarily those of color and with low incomes. EJSCREEN was introduced as a commitment under Plan EJ 2014, EPA’s past environmental justice strategic plan. It builds on years of agency experience in addressing environmental justice, as well as the feedback of outside experts, according to Tai Lung, analyst and EJSCREEN team lead at the Office of Environmental Justice at the EPA.

“As computer mapping technology advanced, the EPA recognized the opportunity and the need to develop a single, nationally consistent tool that could be used by the agency to understand environmental and demographic characteristics of locations throughout the United States,” said Lung. “Prior to its development, other EJ mapping tools were used by various EPA regions and programs, but these tools did not always contain the same elements and were not used in a uniform manner.”

Internally, EPA uses EJSCREEN as a preliminary step to screen for areas that may have potential environmental justice concerns and therefore may be candidates for additional consideration, analysis or outreach as EPA develops programs, policies and activities, according to Lung. Externally, EJSCREEN is regularly used by other federal, tribal, state and local government partners as well as by nonprofit and community groups, business and industry, and academia.

Generally, the tool is intended largely for government agencies to use as a way to review whether or not to approve a permit. Advocates for prisoner rights are particularly excited about the implementation of the new prison layer of the tool and the ways it will support them in documenting environmentally caused health issues in prisons, both existing as well as those yet to be built.

“Using this new feature, we can create reports and release them for journalists to write about, policy people to review and activists to organize around,” said Panagioti Tsolkas, coordinator and co-founder of the Prison Ecology Project in Lake Worth, Fla., the nonprofit that made the original request and urged the EPA to add the new layer to the tool.

The Prison Ecology Project is an effort that grew out of the Human Rights Defense Center in Lake Worth, Fla., and is one of the main outlets for prisoners to communicate about their legal struggles and also for them to learn about what is happening in other prisons, according to Tsolkas.

The mission of the Prison Ecology Project — which first got its start in 2015 — is to map the intersections of mass incarceration and environmental degradation, and create action plans to address the multitude of problems found there. As such, the organization investigates, documents and takes action to address the ways in which mass incarceration degrades the natural environment and the human health of those inside or nearby prisons and jails.

“A common topic on our website would be environmental health issues or water contamination in prisons,” said Tsolkas. “These were not making it into the headline news outside of small and rural counties where these prisons exist.”

In keeping with its mission, the Prison Ecology Project decided to gather up data and make a case to the EPA to show that there is an epidemic of prisons, and those living inside them are being negatively impacted by poor environmental conditions. “One of the first things we did was look at the 2020 proposal public input process that the EPA solicited comments on, and over the course of about a year and a half, we compiled a dozen examples for them to look at,” said Tsolkas.

The Prison Ecology Project presented their research in person at the EPA headquarters in D.C. with a PowerPoint presentation of the map they had created. “We have been building the map and developing awareness alongside EPA staff and encouraging them to take some real steps,” said Tsolkas. “They added the prison layer in August, and pulled from another government agency’s spreadsheet of over 6,000 jails, prisons and detention centers. Now, anyone can easily look at the existing prison sites.”

The development of  EJSCREEN began in late 2010, and the EPA began using an early version of the tool in November of 2012, according to Lung. “Following an external peer review in 2014, EJSCREEN was released to the public in mid-2015,” said Lung. “Since its public release, EJSCREEN has been and will continue to be updated annually with the newest and best data available.”

The most recent update to EJSCREEN that includes the locations of prisons occurred in August 2017.

“In my opinion, this tool and the ability to look at critical health concerns for prison populations is a way to counter the effects of stakeholders who have a financial interest in keeping prisons full and often overcrowded,” said Tsolkas. “The prison system is in many ways untouchable — out of sight, out of mind. This is part of a social movement to challenge mass incarceration and all of the problems it causes. This new tool can help us to take a deeper look at these issues and pull back the curtain a little bit.”

Read the entire article in the November/December issue of Correctional News.