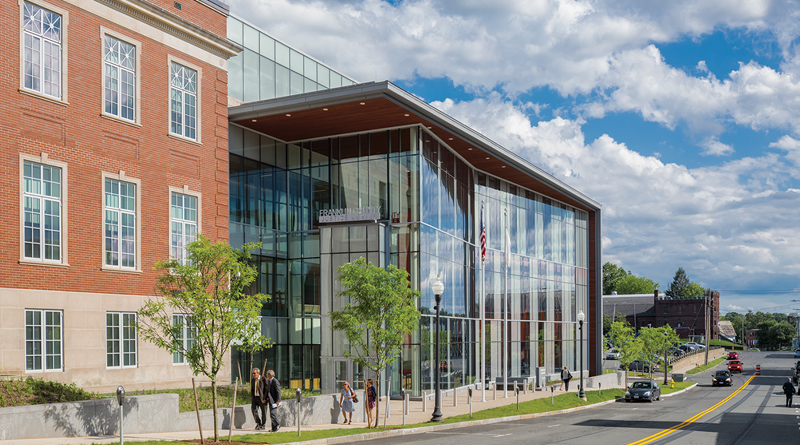 GREENFIELD, Mass. — Benjamin Franklin is said to have once opined, “It is better to let 100 criminals go free than to imprison one innocent man.” Conjectures about Franklin’s jurisprudence could fuel many a late-night bull session, but at least one expression of justice bearing the founding father’s name leaves little room for debate — the Franklin County Justice Center in Greenfield has a new addition, and it’s open for business.

Designed by Boston-based Leers Weinzapfel Associates (LWA), the 109,080-square-foot, $66 million project marries the classic and the contemporary in what has become a string of award-winning courthouses and civic structures by the firm. Following three years of construction, the structure is situated on Main Street in the city of Greenfield, the county seat, which puts a premium on its historicity. This was one of the main considerations for LWA while designing the glass and steel project, which boasts a glazed top floor that sits above a three-story masonry block, made of the same limestone as the base of the original courthouse.

“The biggest challenge was the scale of the addition. The program was several times the size of the existing building, and the surrounding context is two to three stories. Our new courthouse was going to be way out of scale with the surrounding buildings,” said LWA Principal Josiah Stevenson.

Upon stepping into the new building, visitors encounter a bright, three-story orange accent wall in the atrium. Once they pass through the security area, they approach a gray porcelain wall festooned with a pair of public elevators. As dramatic as it may seem on paper when juxtaposed within its early 20th century sibling, the new building is consonant with the surrounding aesthetic environment and has been embraced by the community.

“We worked with the massing to minimize the effect of this large building — setting the upper floor back, fully utilizing the basement and articulating the entry mass to be similarly scaled to match the existing facade. Another challenge was that the existing building could not function as a modern courthouse. The structure was vertically too tight with columns too closely set for a courtroom. We used the existing building for offices and clerical areas and placed the large and tall courtrooms in the addition,” said Stevenson.

The project’s design meticulously revisits the front of the original 1931 brick courthouse while integrating modern functionalities. As a result, the structure actually reduced its footprint from 44,352 to 26,136 square feet. Despite the nearly 40 percent reduction in footage, the structure’s original aesthetic remains intact. Moreover, existing period lighting fixtures, millwork and building carvings were restored and relocated to areas of the structure that underscore the building’s architectural chronology.

In early 2014, the courthouse was emptied, and about 100 staffers were moved into temporary quarters at a nearby corporate center two miles away as Baltimore-based contractors Whiting-Turner Co. oversaw the construction. The doors opened this past February 2017, and the project is expected to receive LEED Silver certification.

The building’s entry was relocated from Main Street to adjacent Hope Street, where the old and new buildings converge to provide accessibility and address circulation and wayfinding. Despite its size, however, the addition doesn’t overshadow the original building, though it boasts a new entry, six courtrooms, a law library, detainee circulation and a jury pool room. An extended roof canopy and glass wall frame the new entry and public zone of the courthouse.

“Three circulation zones — public, detainees and private/judges — never meet until they meet in the courtroom. This is standard modern courthouse design, which is why there are only a few ways to plan a courthouse,” Stevenson pointed out. “It is in a volume of similar size to the existing building, but the new one is much more glazed and welcoming. It is clear this is a civic building and open to the public. This volume holds the law library, jury pool room and entry.  These are the most public elements. Behind that is the courtroom block and behind that, the private circulation.”

“We’re one of the poorer counties, if not the poorest county, in the state, so we have a lot of unrepresented people,” District Court Judge William Mazanec III observed to the Greenfield Recorder, a local news service.

Hence, planners included two stories comprising the court service center and library, which is equipped with computers intended for those who are filing court documents on their own behalfs when serving as their own attorneys. An on-premise manager is available to assist. “This is an important piece of the cog in this particular county,” Mazanec added.

Throughout the design process, Stevenson was committed to retaining as much of the existing building as possible. “Reusing a building is more sustainable than sending it to a landfill -— even one that needs significant upgrades like this one,” he said. “The town seemed to be emotionally tied to the old building. The process would have taken more time and therefore more money to propose tearing the whole thing down.”

To read the entire article, check out the Nov/Dec issue of Correctional News.