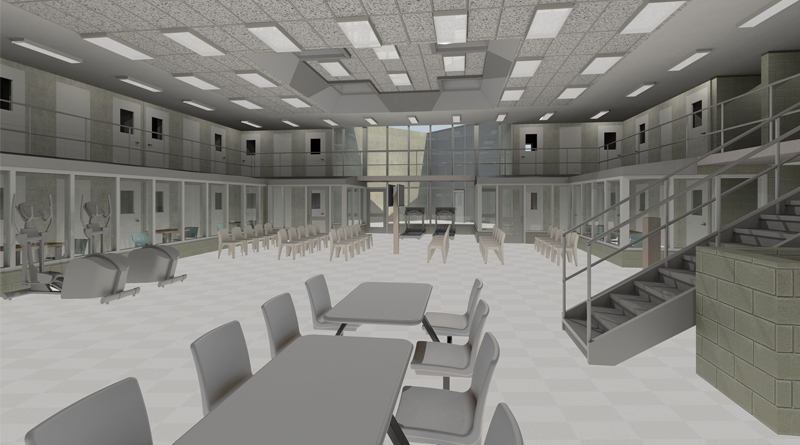 COXSACKIE, N.Y. — Greene County Jail is underway with design plans for the new jail. The new facility will eventually be constructed in Coxsackie, a move from the original Catskill, N.Y., location of the current jail.

The new 80,000-square-foot facility has a budget of $35 million, with SMRT Architects serving as the architect on the project out of its Latham, N.Y., office. The Pike Company out of Rochester, N.Y., will serve as the construction manager for the project.

Greene County currently has what is reported to be the oldest county jail in the state of New York, according to Arthur Thompson, principal architect at SMRT. The new facility will serve to replace the long outdated 19th century jail. The new Greene County Jail will have 98 beds — not including any future double bunking allowed by the New York State Commission of Corrections (SCOC), according to Thompson — an improvement from the 40 existing beds at the current jail.

Some unique and interesting aspects of the new facility are based around the housing area, “which is really the most important part of any jail,” according to Graham Vickers, AIA, associate principal architect at SMRT. The housing area is broken into four separate pods, with cells organized around central day rooms. The pods are broken up into two male pods, one female pod and one “flex pod,” which includes special populations and reception housing.

“Part of the challenge in these smaller facilities is that there are requirements for keeping inmates separate, while also needing to make sure direct supervision is possible,” said Vickers. “With four housing units, we needed to break those housing units into sub-pods in order to achieve this.”

Transparent glass partitions are used between pods to make sure inmates are still visible to security staff in an attempt to meet this challenge. “In this way, we can still keep certain individuals and groups separate from others while still being able to use one security officer to monitor all of the areas at once,” said Vickers.

The design team used lots of natural light in the design, with access to views, bright colors and building materials that will absorb sound and reduce reverberations throughout the facility. This will help in reducing stress and create as peaceful an environment as possible for inmates and staff.

Additionally, the new facility will also have a full outpatient medical unit, and “has everything you would expect in a small doctor’s office,” according to Vickers. The new medical unit is complete with exam rooms, a dental room, a behavioral health interview room, and offices and support spaces for the medical staff.

In addition, the medical unit is designed to create a normalizing experience for inmates — as a healing space without cells. “The medical unit is open, large, safe and secure, and was treated with sensitivity in the design,” said Vickers. “We designed the space so as to treat individuals in the space not as criminals, but rather as people with acute behavioral health issues — as is so often the case. Everything that can be done to get them ready to be successful upon release is paramount.”

Since the facility serves a shorter-term population (as opposed to larger prisons), the new Greene County Jail is specially designed to limit the need for staff to move inmates throughout the facility as much as possible. One way the design will achieve this is through the placement of medical triage interview rooms inside the housing pods, so nurses can determine whether or not an inmate needs to see a doctor in the medical housing pod. In addition, the women’s pod was intentionally placed closest to the medical unit, since women use medical services significantly more than men, according to Thompson.