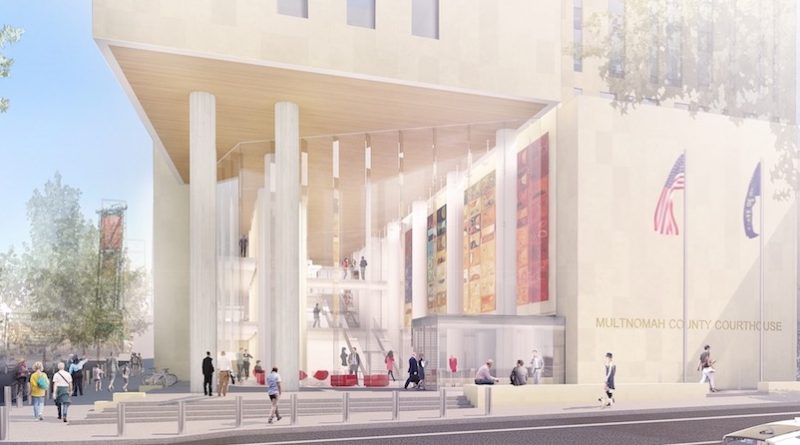 Following decades of pursuit from the county to create the new Multnomah County Central Courthouse, both the county and state reached an agreement to split the costs of the replacement building after finally receiving approval for the project in 2016. Photo Credit: SRG Partnership

PORTLAND, Ore. — The Multnomah County Central Courthouse project in Portland continues on schedule and on budget as construction progresses for the 17-story, 450,000-square-foot development.

Following decades of pursuit from the county to create the new courthouse, both the county and state reached an agreement to split the costs of the replacement building after finally receiving approval for the project in 2016. The $320 million project includes Portland-based SRG Partnership serving as the lead architect and designer, New York-based CGL Ricci Greene as the associate architect and Portland-based Hoffman Construction Company as the general contractor.

The replacement project focuses on three main goals, which include improving public experience, expanding safety and security to the interior and bringing the building’s seismic resistance up-to-code.

Senior Vice President of CGL Companies April Pottorff, FAIA, explained how the central theme of the new courthouse highlights customer service and experience; incorporating self-help centers and centralized public service counters with kiosks and terminals where the public can access information and documents.

“The original layout situated the courthouse staff and the public circulation without separation,” said Pottorff. “This design will allow for adequate queing space.”

The courthouse’s new layout will be arranged to give separate distinct areas to the judges and staff, build detention areas with ample daylight and situate a separate block for the public to go in-and-out, creating a consistent flow throughout the courthouse.

“Every courtroom floor has four courtrooms and is set up so any judge could use any room on any floor — 44 courtrooms, 44 judges and 10 more could be added,” said Executive Vice President Frank J. Greene, FAIA, of CGL Ricci Greene. “The layout is set up for public convenience and operational proficiency for court staff.”

Located on a riverbank in downtown Portland, the entrance to the new courthouse will include a grand stairway that can be seen through a double-height glass on the corner entryway, providing a transparent view of the public lobby from the entrance. The interior space will adequately ensure that security lines won’t reach the outside as they typically did in the previous courthouse.

The triple height lobby will feature a grand staircase, with the staircase ending at the jury assembly area on the third floor, where the building will have unobstructed views of the river. The renovation will also include an exterior garden area in between the new courthouse and the existing Jefferson Station building, a historic Portland building.

“It will be easy to orient yourself and find your way through the building, reinventing their processes to be public friendly. It’s going to be quite a high-rise landmark and quite a statement about 21st century justice — very customer friendly,” said Greene.

Additionally, the courthouse is slated to eventually earn LEED Gold certification. The team used gradient concrete slabs for the bottom, 8 feet of the room for both heating and cooling, as well as used solar collectors on the roof, thus reducing energy costs in the future.

Greene and Potorff also explained how the team used a shared system to best support collaboration, joining the building owners, contractors and architects, all in the same space during the design process. They used linked computers and all shared the same access to needed information. “It allowed us to fine-tune the design and eliminate contingencies,” stated Greene.

Completion of the courthouse project is expected in December 2020.