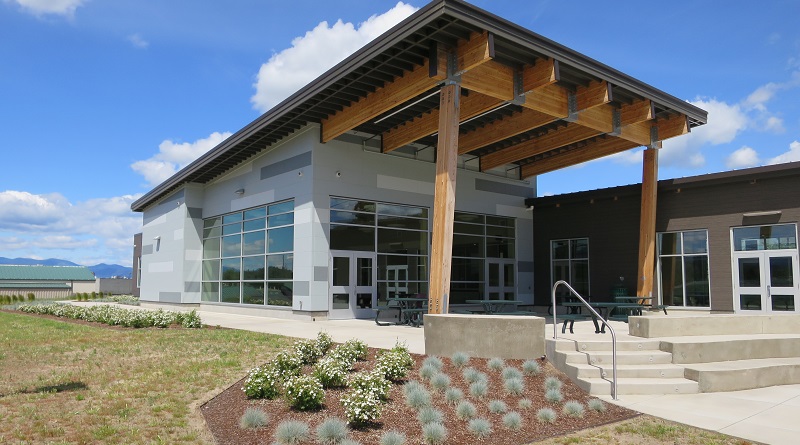 The new facility was funded during the 2015 legislative session as part of the 10-Year Plan for Facilities spearheaded by the Oregon Youth Authority (OYA). The sleek new building moves classes out of the students’ living units and into a physically separate building; fittingly, a new bridge was also constructed leading to the new facility, which is aimed at steering its students towards life-changing knowledge and opportunities.

Among the highlights of the new school are four digitally connected classrooms, a career center, manufacturing technology lab, barber shop, commons and outdoor learning space. Students can also now get a workout on a new recreation field, which brings the total recreation space at the facility up from just over one acre to almost 10 acres.

Also on view during the groundbreaking was the new site of the Native American sweat lodge, created by youth with guidance from the Southern Oregon Indian Center, and a mosaic mural emphasizing diversity and inclusiveness. The mural was designed and made by youth working with artist Toms Royal and Oh Planning + Design architects, based in Portland, Ore. — and also the designer of the overall school project.

In addition to high school diploma and GED programs, New Bridge offers a dual-credit college program, with manufacturing technology, barbering and a number of other vocational classes and certificates. The school is operated by Three Rivers School District, under the supervision of the Oregon Department of Education. The school is staffed by a principal, eight teachers, four support staff and a graduation coach.

The new building officially opened at the end of April for the approximately 100 youth housed at the OYA’s second-largest facility. Before that, students attended school in classrooms in their living units.

The OYA is an advocate of positive youth development and a therapeutic approach to support rehabilitation, and that philosophy is reflected in the physical features of the building, from its large windows providing ample natural lighting and views of nature to its carpeted floors and soothing paint colors.

The main construction contractor on the project was Adroit Construction Company, based in Ashland, Ore.