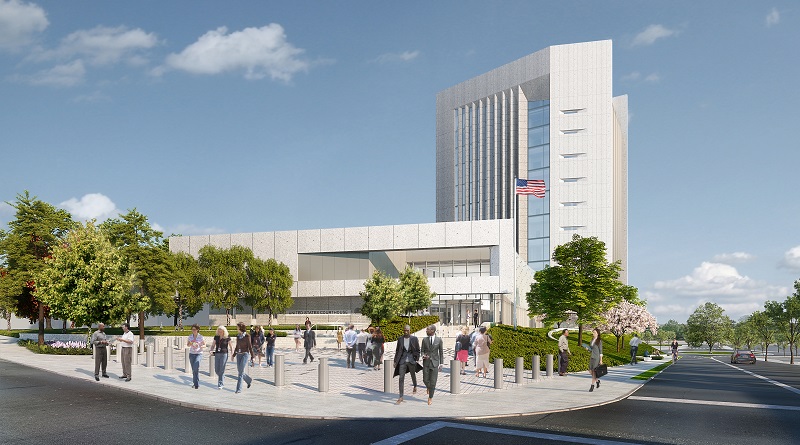 HARRISBURG, Pa. — More than 120 attendees joined the U.S. General Services Administration (GSA) recently in Harrisburg for a groundbreaking ceremony on a new courthouse for the U.S. District Court for the Middle District of Pennsylvania.

Set on about 4 acres, the new 243,000-square-foot courthouse will provide eight courtrooms, 11 chambers, 42 indoor parking spaces and holding cells for detainees. The new facility will also provide workspace for the U.S. Court Library, the U.S. Marshals Service, the U.S. Attorney’s Office and the U.S. Trustee Program.

“GSA’s mission is to deliver the best value in real estate to government and the American people,” said GSA Regional Administrator Joyce Haas in a statement. “Through the partnerships we’ve developed at the federal, state and local levels, the new U.S. Courthouse will be a 21st century facility that will benefit both the city of Harrisburg, our federal partners and the community of users who pass through it every day.”

“Our success is a result of the commitment, cooperation and collaboration of many,” said GSA Public Buildings Service Commissioner Dan Mathews in a statement. “Thank you to the members of Congress, judges, our design and construction companies, GSA staff and the community for your hard work, dedication and support of this project.”

The $192.7 million project was designed by Ennead Architects of New York. Construction began in May 2018 by Mascaro Construction Company LP of Pittsburgh and is slated to be completed by fall 2021.

“Inspired by Harrisburg’s civic history, regional landscape and evolving Midtown urban fabric, the building design aims to establish the new United States Federal Courthouse as a northern gateway and contemporary civic landmark that embodies the vital intersection between the Federal judiciary and the community it serves,” states official information from the Ennead Architects website on the project. “Located on the geographic ridgeline between the Susquehanna River and Paxton Creek at the corner of Sixth and Reily Streets, the new courthouse aims to build upon Midtown Harrisburg’s history and sense of community. The building and its surrounding landscape will be a civic icon and public space that serves as a catalyst for further revitalization of the area while promoting stronger visual and physical links to the Capitol Complex and the rest of Harrisburg.”