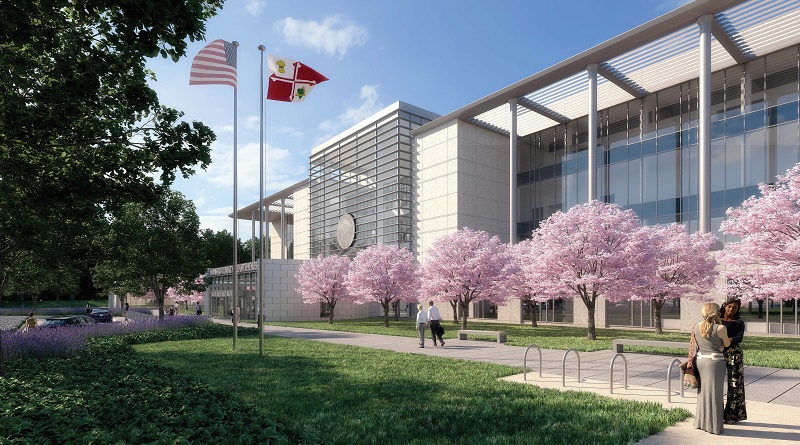 This is an exterior rendering of the planned Howard County Circuit Courthouse in Maryland. Photo Credit: Edgemoor-Star America Judicial Partners

The brand-new courthouse was necessary due to the shortcomings present in the existing 175-year-old courthouse, located in Ellicott City, Md.

The winning plan presented by Edgemoor-Star America is centered on a 237,000-square-foot courthouse designed with optimal safety and security. The design includes a four-story atrium, roomy entryway with safety screening for those entering the new courthouse, plus separate hallways and elevators for inmates to help ensure public safety. The complex will also include a 691-space parking garage neighboring the courthouse, include office space and a courtroom for a sixth judge, and a larger and more comfortable jury assembly area. Holding cells for inmates will also be included in the design, though details there are not yet publicly available.

“We are thrilled to partner with a well-organized, AAA-rated owner like Howard County to deliver the new Circuit Courthouse under this innovative P3 delivery model,” stated ESJP Project Manager and Edgemoor Managing Director, Brian Dugan.

The recent announcement is the newest progress in a procurement process that began when nine Expressions of Interest were received from interested project companies in September 2017.  Three of those applying companies were then short-listed and were provided with Howard County’s formal Request for Proposal in November of that year. And in May 2018, technical and financial proposals were submitted by the trio of companies.

“All three proposing teams presented exciting design and maintenance plans for our new courthouse, and ultimately, the proposal from Edgemoor Star-America was chosen as the best value for the county,” said Kittleman in a statement. “This team provided an elegant and well-thought-out site plan that incorporated an iconic and aspirational design with an honorable and stately building. Their design for our future courthouse will prove to be an architectural landmark that expresses the values and traditions of Howard County’s justice system.”

Demolition of the Thomas Dorsey Building is scheduled for June or July 2019, with construction of the new Circuit Courthouse kicking off in August 2019; it is anticipated to be prepared for occupancy in mid-2021.

As part of a creative financing approach, Howard County is expected to provide $75 million, borrowed through general obligation bonds, and a yearly service payment of approximately $10 million starting in 2021, when the courthouse is slated to open. According to the agreement’s terms, Howard County will take over the building after 30 years.