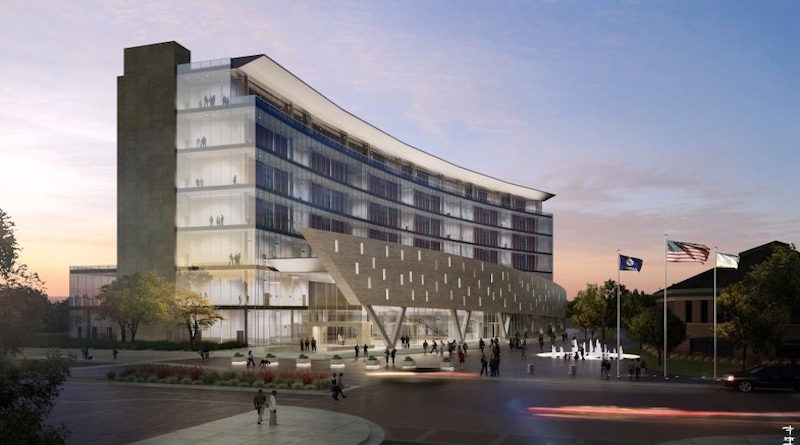 OLATHE, Kan. — Accessibility is said to be the focal point of a new courthouse construction project currently underway in Johnson County. According to the Kansas City Star, the $193 million project is currently in the concept and design phase, with a number of partners on board, including the Johnson County commissioners, the City of Olathe, and Olathe’s Persons with Disabilities Advisory Board.

The new courthouse was designed by Fentress Architects and TreanorHL, and is being constructed by JE Dunn Construction. According to Fentress Architects’ website, the seven-story, 140-foot-tall structure will be the tallest building in Olathe.

FOX4kc.com reports that the new building will reportedly sit at the corner of E. Santa Fe Street and N. Kansas Avenue in Olathe, right across the street from the current Johnson County Courthouse.

“It is really long overdue,” said Johnson County District Attorney Steve Howe to FOX4kc.com. “The building that we currently have is having monthly problems as I speak. This facility will be able to serve the people at Johnson County for the next 75 years.”

In recent years, employees and Johnson County residents reportedly began voicing certain concerns due to the courthouse not being compliant with ADA regulations. There were reportedly security concerns about keeping victims separated from suspected criminals. The building itself began to show its age and major repairs were needed.

According to FOX4kc.com, the $182 million project was approved by voters in 2016 via a quarter-cent public safety sales tax and the 320,000-square-foot building will have a total of 28 courtrooms with room to expand to 36 if needed.

The current structure reportedly opened 66 years ago and was not originally built to serve as a courthouse. The original structure merely served as office space, and over the years its interior was renovated to house courtrooms and the Johnson County Sheriff’s Office.

“If the courthouse is cumbersome or not user-friendly, potential anxiety can occur,” said Project Architect Jeff Lane to the Star. “These buildings already bring some anxiety to persons using them and we want to help limit those feelings.”

According to Lane, many of today’s active courthouses were built before the Americans Disability Act was passed in 1990, meaning they were not designed to accommodate those with disabilities. The Johnson County Courthouse was reportedly among them. The Persons with Disabilities Advisory Board and the courthouse planning team is reportedly focused on ensuring that accessibility challenges do not occur in the new courthouse.

According to the Star, a few of the many accessible design elements planned for the new courthouse include outside ramps and non-slip, zero-stair entries. Exterior and interior entrances, as well as restrooms, will reportedly be fitted with wheelchair-accessible automatic doors.

Sinks, restroom stalls, coat and hat racks, and light switches will also reportedly be wheelchair accessible. Audio and visual fire and tornado alarms will be installed throughout the facility, along with audio loops for the hearing impaired, according to the Star. Walls and floors will reportedly feature high-contrast materials for those with limited vision, so they can navigate the spaces more safely and easily.

“We all want the same thing. Everyone wants to a see a world-class accessible courthouse,” said Mark Gash, chairman of the county’s Human Relations Commission. “It’s fundamental to who we are that everyone has rights to this branch of government and can access that branch. The best barometer of the value of a community is how it treats its vulnerable. That’s the starting point for our board and our work.”

The new courthouse is slated for completion by late 2020 with a move-in date of early 2021. The old courthouse will eventually be torn down and converted into public green space.

Reports from FOX4kc.com and the Kansas City Star contributed to this report.