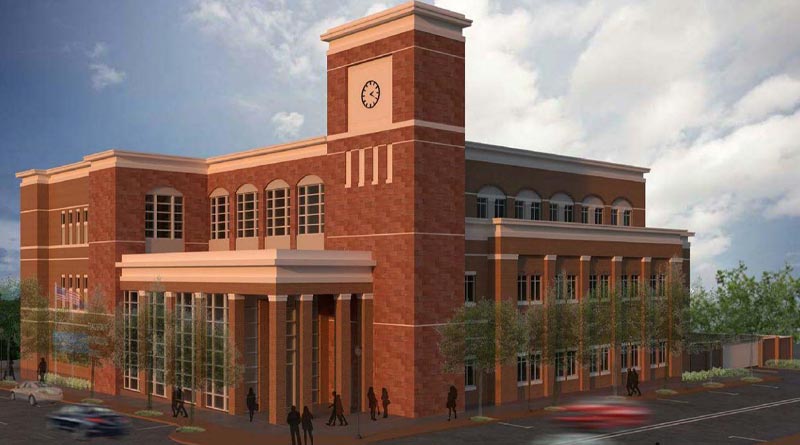 The construction of a new municipal courthouse in the city of Flagstaff may spur development in its downtown district. Photo Credit: City of Flagstaff

FLAGSTAFF, Ariz. — The construction of a new municipal courthouse in the city of Flagstaff may spur development in its downtown district.

The Flagstaff Municipal Court has operated from a converted furniture store since 1985. The challenges employees and court visitors face on a daily basis include inadequate security, courtrooms, client conference rooms and jury assembly areas and a lack of a prisoner holding space or separation of the prisoners from the public. The facility has been deemed too small for current or future operations, is 85 years old and reaching the end of its life cycle.

Current facilities at both the county and the city also lack adequate parking. More parking is believed to not only benefit courthouse visitors, but also increase parking availability downtown. The current building also floods during rainfall, contains asbestos and is structurally deteriorating.

The Arizona Daily Sun reports that according to Senior Project Manager James Duval, progress of the new municipal courthouse is currently underway.

The infrastructure that was chosen for the new courthouse is meant to mirror and pay respect to the Coconino County Superior Courthouse, said Duval to the Arizona Daily Sun.

Thanks in part to Prop. 412, also known as the Municipal Court Facilities Bond, the city commitment to the project is estimated to be $21.5 million. Up to $12 million will be funded through the bond, with the remaining balance paid through court fees, real estate sales and other funds, along with the county contribution to the project.

A report from the Arizona Daily Sun contributed to this story.