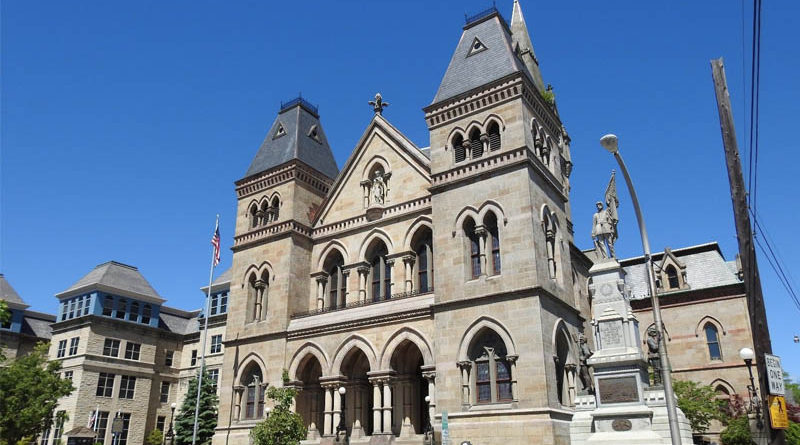 Originally built in 1875, the Blair County Courthouse was designed by architect David S. Gendell to be in “the modern Gothic style of architecture with the Italian treatment.” The historic structure’s stone walls featured a cut stone facing and was renowned for its carvings including over 50 sculpted human heads. A notable feature of the courthouse was its five-story clock tower which remains to this day.

In 1906, an addition to courthouse was constructed under the direction of architect William Plack. He faithfully copied the original materials and style, making the addition seem an integral part of the original construction with its elaborate stonework in arches, cornices and string courses.

Despite its stately appearance, time, weather, invasive alterations and decades of neglect had taken their toll on the courthouse. Water damage was so prolonged and extensive that the commissioners were advised in 2014 that in two years’ time demolition and reconstruction of a replacement courthouse at a cost well in excess of $20 million would be necessary. The other option which was selected by the county commissioners was committing $5 million for restoration, thereby extending the useful life of the building 100 years with ongoing maintenance.

A multi-year restoration project was proposed by Commissioner Terry Tomassetti in 2015 and the restoration effort has been developed and monitored by the County’s Courthouse Preservation Oversight Team which has meet every two weeks since the Fall of 2015.

Exterior work on the 1875 courthouse began first. This phase included the elimination of the water infiltration, removal of falling plaster, repair of selected rotting exterior window frames in danger of falling, restoration of two leaking front tower roofs and cresting, recreation and repair of missing and damaged stained-glass windows, documentation of all hand-carved architectural sculptures, and restoration of the missing chin and gold leaf detail of the statue of Lady Justice.

The work continued with elimination of destructive water leaks damaging the 1906 courtroom and the Lawyers Lobby, and mitigation of priority public safety conditions on the clock tower. The tower work included addressing loose and broken masonry, some of which had fallen from the tower, removal of 400-pound stone filigrees in immediate danger of falling, removal of trees growing on the tower and installation of flashing to prevent future vegetative growth and displacement and falling of tower masonry.