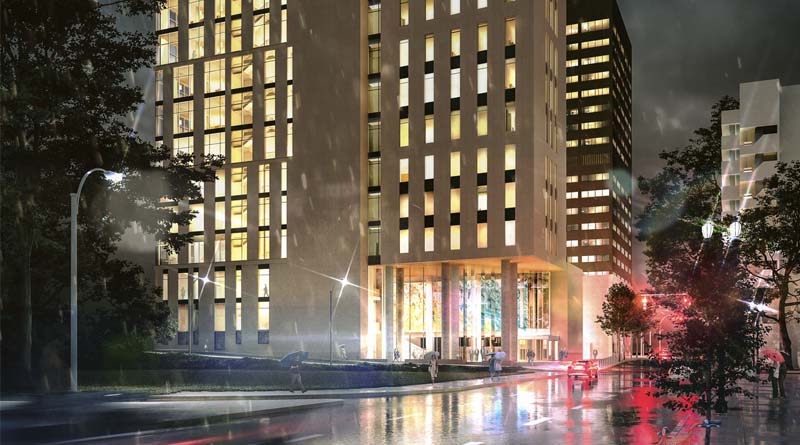 PORTLAND, Ore.—Portland’s historic Jefferson Station building is not just getting a facelift. Rather, it is being renovated for integration into the new Multnomah County Central Courthouse.

A new courthouse is definitely needed. When Multnomah County’s central courthouse was originally built between 1909 and 1914, the county had only 250,000 residents. This was also long before modern building code standards for earthquakes were in place.

Originally built as an electrical substation by the Portland Railway Light & Power Company to provide power to downtown, Jefferson Station is the only remaining structure of its type in downtown Portland.

Listed on the National Register of Historic Places, this building played a role in distributing electricity for the business district’s early street lighting and railway system. Due to its original use and the reinforced concrete construction type, its historic designation required that the building be preserved.

Today, Multnomah County has tripled in population. With such an increased demand—coupled with a century’s worth of use—the courthouse has developed serious safety problems that no longer can be deferred.

“A century’s worth of public use—combined with increased demands from today’s much larger population of about 750,000 county residents—has created major functional difficulties and serious safety problems that must be resolved,” says Julie Sullivan-Springhetti, Multnomah County Communications Director.

“The courthouse is an essential home for the community’s daily judicial operations and must be functional even in the case of a major catastrophe like an earthquake. The courthouse is one of the few community spaces that the public is compelled to enter—for activities ranging from jury duty to fulfilling legal obligations by paying a parking ticket or serving as a trial witness. In addition, the state of Oregon requires the county to provide facilities for the courts to operate.”

Hoffman Construction is the general contractor on this $324.5 million project. Working in an historic building on the site, the team developed a highly collaborative process that enabled everyone—from the engineers to the construction trade partners—to clearly understand the client’s goals for the project and to work together to achieve them.

The design team developed a creative plan to incorporate the three-story structure into the new courthouse complex.

The new 17-story courthouse will flank two sides of Jefferson Station, creating an L-shape around the low-slung historic building. The design brings more natural light into the L-shaped tower compared to a full block tower.

Multnomah County’s adaptive reuse of Jefferson Station will return the building to public use. The original south and west exterior facades will be preserved, along with a 20-ton overhead gantry crane that hovers above the building’s second floor. Tall windows on the upper floors will be refurbished. The structure will be seismically upgraded and building systems updated to support modern courthouse requirements, while preserving the remaining historic elements.

“The lobby will be animated by a café, information kiosks, directional displays, public art and a dramatic staircase that moves through the space and culminates in a majestic view of Mt. Hood and the Willamette River. Most of the public service elements used by County citizens will be located in this spacious lobby, creating the feeling of an open marketplace with ready access to services.”

At the heart of the design is the presence of woodclad courtrooms that are clearly visible through the glass facade of the building. Public spaces outside the courtrooms provide the building exterior with activity and dynamic energy. The next layer of the facade is glass, reinforcing the transparent nature of justice, overlaid with a regular structure that represents stability and order. The final layer of the exterior is composed of a series of limestone panels in an irregular pattern that symbolizes the people of the county.

“Using a holistic approach, the Courthouse project has sought to push the environmental sustainability limits in every aspect of its design,” says Simpson.

“The uniquely composed façade coupled with the structural thermal mass is designed to capture the solar heat gain delivered by the morning sun. A radiant hydronic loop embedded in the concrete floor absorbs the energy that falls on the slab and redistributes it to other public spaces, reducing building heating loads on a clear winter morning by up to 20 percent. Architecture 2030 targets will be achieved by combining limited glazing, a high-performance envelope, radiant heating and cooling systems for judge and staff offices, and a displacement system for the courtrooms and public spaces.”