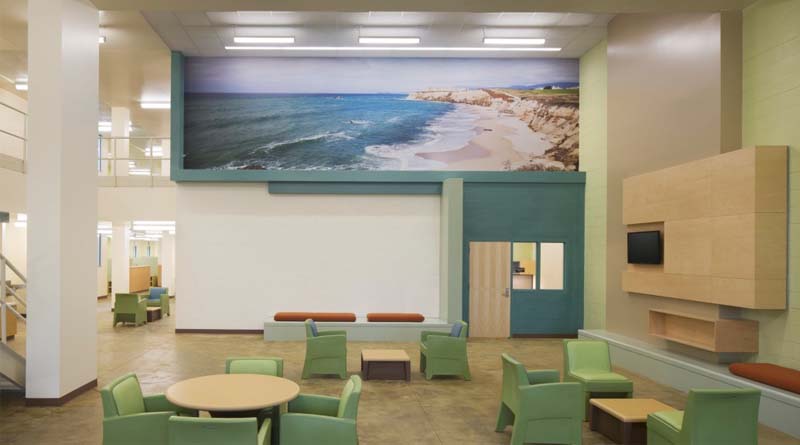 SANTEE, Calif.—A first-of-its-kind in the U.S., the Las Colinas Detention and Reentry Facility in Santee—designed by HMC Architects and partners KMD Architects—uses environmental and behavioral psychology to improve the experience and behavior of inmates and staff. Using scientifically proven research on how light, color, materials, texture, air quality, acoustics and access to nature affect mental and physical well-being, design decisions were informed by the idea of transforming lives.

The $222 million, 45-acre campus—built by Balfour Beatty Construction—is designed around a central courtyard with various amenities that promote good behavior. At Las Colinas, inmates that exhibit good behavior are granted increased levels of autonomy within the facility. There are free-walk zones and areas for volleyball, Zumba and yoga classes, and religious services. Because the layout is open, staff can easily supervise everyone in the space.

Unlike traditional prisons, where most services are housed centrally in enclosed environments with little natural light or outdoor space, this campus is divided into zones—administrative, communal, programmatic and housing—connected by a central quad or village green intended for recreation, akin to a typical university. By rethinking the design and arrangement of living and community spaces, administrators can promote rehabilitation and create a safer environment for correctional facility staff in the process.

HMC Design Principal James Kruege, AIA, NCARB, said that when building a correctional facility based on normative design principles, administrators must maintain a careful balance of restrictions and freedom.

“On one hand, healthy, natural social interactions between staff and incarcerated individuals must be promoted; on the other hand, the safety of all must be ensured. This is accomplished by enhancing supervision and increasing transparency. Ample windows with views into indoor and outdoor spaces allow guards the line of sight they need to maintain a secure environment, while at the same time allowing inmates a level of controlled privacy.”

HMC Architects recently produced a short film about the facility called “A Place of Second Chances,” which won second place in the Fifth Annual American Institute of Architects (AIA) Film Challenge: A Blueprint for Better. This event invites architects and filmmakers to collaborate to share stories of designers and civic leaders working together to build resilient and sustainable communities.

Filmed by HMC’s Chris Grant, Francisco Penaloza, and Dave Fennema, “A Place of Second Chances” presents the hopeful stories of two individuals who prove that the tide of recidivism can be reversed, when the prison is designed to comfort and rehabilitate, rather than simply punish. Kanya Zeppeda and Robin Schwab—collectively spent close to seven years in Las Colinas Detention and Reentry Facility. Zeppeda was one month pregnant when she began her sentence. With over half of prisoners in America’s corrections system suffering from abuse, trauma and mental illness, the County of San Diego recognized that building a healing environment to promote well-being and prevent further psychological deterioration was imperative. This not only prepared Zeppeda and Schwab for a successful transition back into society upon release, it also helped them overcome their past to become positive role models.

The film can be viewed at https://www.youtube.com/watch?v=m4Vz-07gnXw