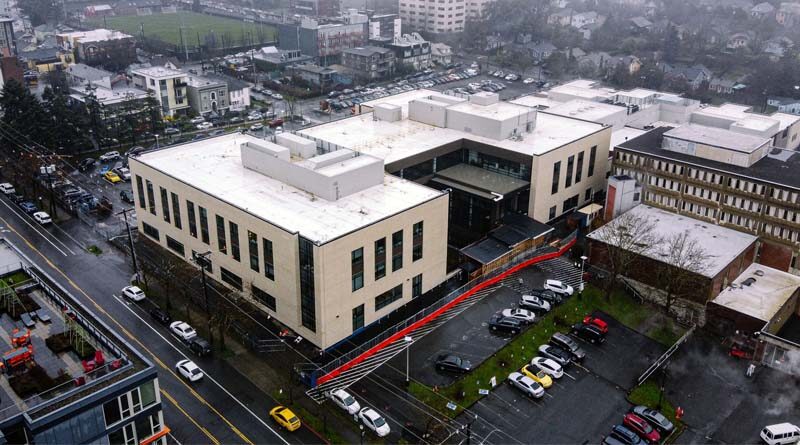 In an article in the Seattle Times, the new building, which opened in mid-February, offers high ceilings, light and open spaces, artwork and a modern facility where King County’s juvenile-justice system can strive toward its stated goal of “zero youth detention.”

The general contractor is Howard S. Wright, a Balfour Beatty company, and the design was done by Integrus Architecture and HOK.

A large courtroom that can hold 100 people is situated on the first floor is for high-profile cases that may attract media or public attention.

King County Juvenile Court Manager Paul Daniels said, in a statement, that the judges’ benches are raised, but not so high as to be imposing or “ominous.”

Similarly, all the attorneys and defendants will sit at a single curved table in front of the judge. “It’s just a softer environment,” he said. “It’s not as adversarial.”

Each new courtroom is wired for video and audio and the hearing-impaired and there is free childcare available on-site.

The new facility has 100 fewer beds than the Youth Services Center (YSC), which was built in 1952. The new center was designed so its secure wings can be taken over and repurposed as the size of the detention facility continues to shrink.

The lobby and public areas are framed in glass, steel and brick, and resembles an airport concourse or waiting area. The structure contains more than 90 pieces of original art stretched over four floors. Funded through the county’s 1% For Art program, there are murals, glass sculpture, photography and paintings.

Additionally, every small single-occupancy cell has a floor-to-ceiling painted blackboard with chalk. Common areas include tables and chairs, couches and big-screen TVs mounted high on the walls. Each block houses up to 16 residents each has a modern classroom.

“This is the first time the space reflects the care and dedication of the workers it contains,” said Judge Ramseyer.

Ramseyer acknowledged to local media that there has “been a lot of controversy about building this space,” including passionate opposition and protests. A group of activists, the No New Youth Jail Coalition, demonstrated and petitioned for several years against the new facility and incarcerating youth in any capacity.

However, Ramseyer said that regardless of opinions over the need or efficacy of youth incarceration, the old YSC was inadequate for the county’s needs.

She said that families visiting the old Youth Services Center were confronted with cramped courtrooms, scattered resources, and almost no privacy. It was not rare for the families of a victim to be shoulder-to-shoulder with the family of an accused offender. Attorney and client conversations took place in hallways or even closets.

The goal of all of this is to continue to move King County toward its goal of doing away with juvenile detention altogether.

King County Juvenile Court Manager Paul Daniels said, in a statement, that there were approximately four juveniles in detention in early February. The average daily population last year was 38.

Derrick Wheeler-Smith, who is the director of Zero Youth Detention at the King County Department of Public Health, said that in 1999 the average daily juvenile jail population in King County was around 200 — most of them children of color.

“But we can’t rest on our laurels,” Wheeler-Smith said. “You can’t invest in the future without divesting ourselves of the past.”