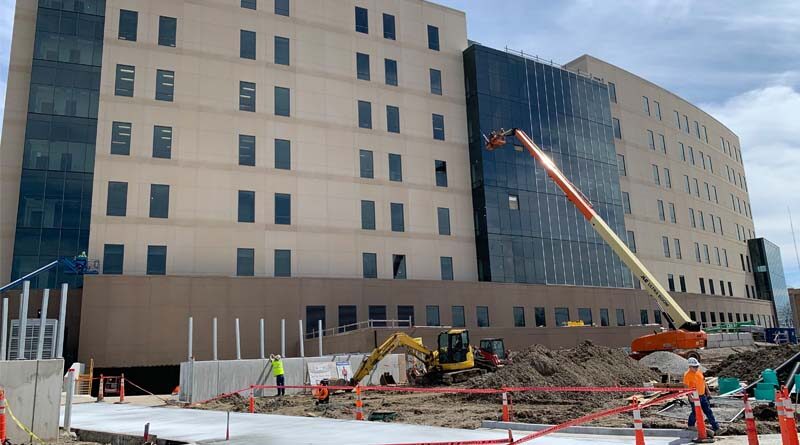 OLATHE, Kan. — Construction is nearly complete on the new Johnson County Courthouse project. With a slated completion date of this fall, the $175.5 million courthouse will aim to open in January 2021.

Spanning 356,831 square feet, the new courthouse was designed by Fentress Architects and TreanorHL, and is being constructed by JE Dunn Construction. The seven-story, 140-foot-tall structure will be the tallest building in Olathe.

In addition, because the new courthouse is across the street from the Johnson County Sheriff’s Office Central Booking facility, the project required the construction of a new tunnel underground for security transport of inmates to and from the courthouse.

It has been 20 years since Johnson County first identified that a new courthouse was needed to serve the community. The existing courthouse was first built in 1951 and received four additions throughout the decades, with the latest addition completed in 1976.

In recent years, employees and Johnson County residents reportedly began voicing certain concerns due to the courthouse not being compliant with ADA regulations. There were reportedly security concerns about keeping victims separated from suspected criminals. The building itself began to show its age and major repairs were needed.

The new courthouse will provide more space, include enhanced security and be ADA compliant. Accessible design elements planned for the new courthouse include outside ramps and non-slip, zero-stair entries. Exterior and interior entrances, as well as restrooms, will reportedly be fitted with wheelchair-accessible automatic doors.

Sinks, restroom stalls, coat and hat racks, and light switches will also reportedly be wheelchair accessible. Audio and visual fire and tornado alarms will be installed throughout the facility, along with audio loops for the hearing impaired. Walls and floors will reportedly feature high-contrast materials for those with limited vision, so they can navigate the spaces more safely and easily.

“This facility will be able to serve the people at Johnson County for the next 75 years.”

This project was approved by voters in 2016 via a quarter-cent public safety sales tax. The building will have a total of 28 courtrooms with room to expand to 36 if needed.

The old courthouse will eventually be torn down and converted into public green space.