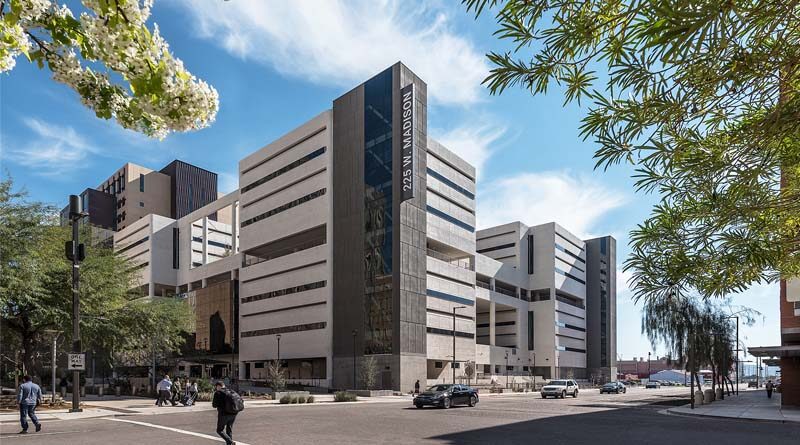 PHOENIX—Construction was recently completed on the new $65 million Maricopa County Attorney’s Office that has been named 225 Madison.

Located at 225 W. Madison in Phoenix, DLR Group served as the architect on this impressive project, and Layton Construction was the general contractor. The new facility is now acting as a central location for the once dispersed locations of the Maricopa County Attorney’s Office.

“The original thought for the building was to renovate it for a correctional facility,” said Andrew Geier, executive vice president of Layton Construction.

“However, this proved more expensive than building a completely new jail. The rebuild would have required full demolition of the old building—costing $10 million alone—which is why County officials opted for renovation instead. Although it was a complex project, choosing an adaptive reuse renovation over a demolition and rebuilding on the same location saved the county nearly $70 million.”

The project took approximately two years to complete. Much of the interior was demolished via remote control demolition machines, clearing the way for a brighter, more energy efficient office space.

“Maricopa County was looking for a creative way to redevelop a downtown eyesore into an asset that greatly improved the area,” explained Geier. “After the renovations, the formerly-abandoned jail will now house and centralize more than 900 County staff that were previously scattered throughout the county in leased space. Saving the County money, while providing them with a much-needed, high-quality facility was our goal from the beginning. Our focus on predictable outcomes ensured the building will be useful for the attorneys who work there and the County itself for years to come.”

One of the major interior upgrades included larger window wall sections cut above the structural load bearing portion of the 8-inch thick, cast-in-place exterior concrete sprandel panel wall. Major mechanical, electrical, HVAC and plumbing replacements and upgrades were installed. The project was completed with the addition of a secured bridge extending from the building to the adjacent court facility.

County buildings in the downtown core are all cooled on a chilled-water loop operated by NRG Energy. The upgrades to the cooling system at 225 W. Madison allowed Maricopa County to add it to the loop creating a more efficient, comfortable working environment in the 263,000 square foot building.

Also included is a rooftop garden that is atypical of any new government office building. It proved cost-effective to repurpose the inmate exercise areas to exterior spaces, allowing more offices to take advantage of perimeter windows. As a result, no space in the office building is more than 60 feet away from a window. This outdoor rooftop space is located on the north side of the building, allowing for cool breezes and spectacular city views. It provides a great place for attorneys to take a break outside without the hassle of going back through security.

“The design challenge considered how to transform a secure, closed and fortified structure designed to separate individuals from society and completely reinvent it as an open, welcoming workspace with daylight and views,” said DLR Group Principal Larry Smith, AIA. “This required a new level of transparency, but it had to be accomplished without compromising the structural integrity of the original cast-in-place concrete structure which also serves as the exterior skin.”

Added Darcy Gray, Layton Construction Manager on the project, “We initially considered demolition drop zones on the building’s exterior, but in coordination with our demolition subcontractor, were able to utilize existing stair shafts as debris chutes, keeping demolition contained within the structure.”

“Finally, in order to accommodate a bus processing route, we worked around the clock on weekends for three months to complete the pedestrian bridge connecting the two buildings without closing or blocking off the intersections below. All the construction had to be completed in the air using a crane to carefully fly materials into place in a very tight area,” said Andrew Melis, Layton Construction Assistant Project Manager on the project.

“For the repurposed Madison Street facility, the design reconnected the building to the urban fabric and in the process enhanced the street and pedestrian environment,” said Smith. “Ultimately the decision to use the highest form of sustainability be re-purposing an existing facility resulted in a win-win-win for the County, staff, and community.”

Added Maricopa County Board of Supervisors Chairman Clint Hickman. “We knew the building still had a lot of life in it, just not as a jail facility. We have moved hundreds of County Attorney employees to a modern building and soon we will be able to relocate other departments out of leased space saving taxpayers’ money for years.”