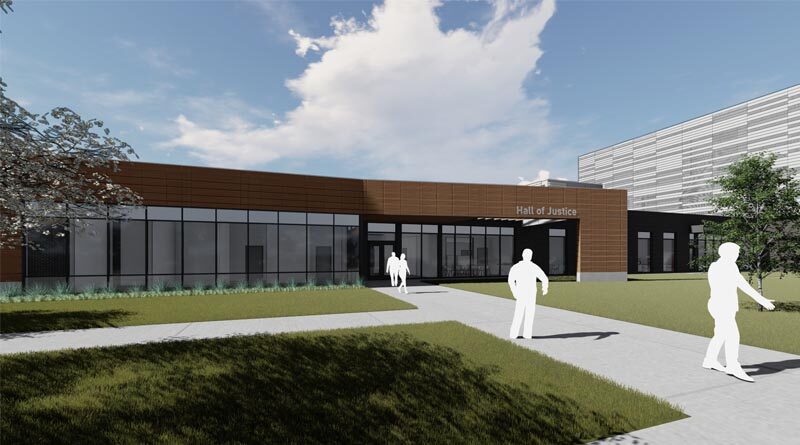 The Sarpy County Board of Commissioners recently unanimously approved a schematic design for the new correctional facility on the northeast corner of 84th Street and Highway 370 in Papillion. The schematic design is the first substantive step in the design process, which sets the scope and general appearance of the project. The team will now move on to the design development phase, followed by the creation of construction documents.

Construction costs for the approved schematic design are estimated at $68.5 million, with an additional $11.4 million in architecture and engineering fees, furnishings, equipment, and contingency funds. The County has been saving for the cost of a new jail for several years, with $13.5 million accumulated in the Sinking and Inheritance Tax funds. The County will issue bonds for the remainder of the cost, estimated at $66.4 million.

“After months of collaboration, expert involvement and a lot of hard work, we have a design that meets our immediate needs as well as our needs in the future,” said Sarpy County Board Chairman Don Kelly, in a statement.

“Sarpy County is growing faster than any other county in the state, so we need a correctional facility that addresses our current overcrowding issues, but also has room to expand in the future. This design does that.”

Created by DLR Group with input from almost 100 Sarpy County stakeholders and subject matter experts, the schematic design sets the footprint and general layout for the new 146,000-square-foot facility. The design includes space for 368 inmates, a dedicated behavioral health unit, a secure courtroom and video arraignment areas, as well as space for educational and rehabilitative programs.

The design also includes a planned secure connection that will join the new correctional center to the Sarpy County Courthouse.

“A lot of thought went into the design of this facility, both inside and out, from the exterior that blends into the appearance of the Courthouse to the dedicated space to address inmates’ mental health needs,” said Commissioner Gary Mixan, vice chair of the County Board, in a statement.

“Security was obviously a key consideration, and this design allows us to keep our community, our staff and the inmates safe.”

The core services in the new facility, including medical care, food service, laundry, master control center and intake/release area, are designed to accommodate future expansions and an additional 224 beds. The new layout also allows the Correction’s Department to utilize a direct-supervision model, which is an industry standard best practice for safety in correctional centers.

The county’s existing 148-bed jail opened in 1989 but has consistently exceeded capacity since the mid-1990s. At various times in the past two years, the jail population exceeded 200 inmates, meaning Sarpy County has had to pay to house inmates at other facilities. The lack of capacity has led to unsustainable costs for staffing and transporting inmates to and from other facilities.

Annual bond payments for this facility are estimated at $4.9 million per year, which will be paid with a portion of the County’s existing levy. Current financial analysis shows the county will not need to raise the levy to pay for the bonds or the additional staffing costs associated with the new jail.

In an effort to control costs, the County Board hired JE Dunn Construction as the project’s construction manager. The company will build the jail for a guaranteed maximum price, which will be presented to the County Board for approval during the next phase of the design process.

Construction is scheduled to begin in early 2021 and be completed in late 2022.