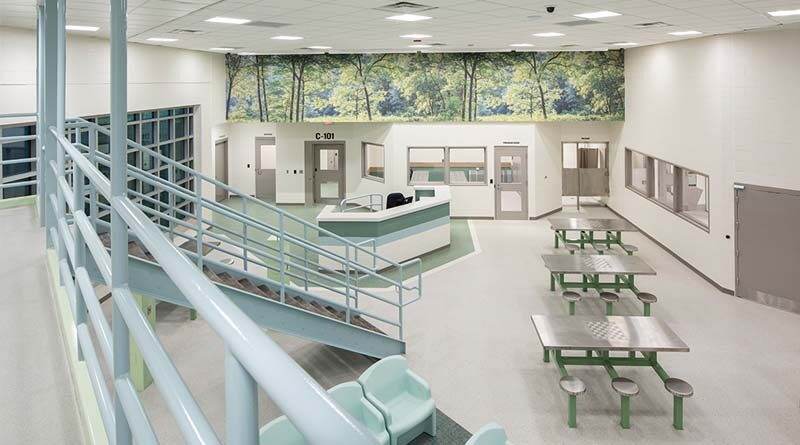 Each housing area features a large mural with a matching paint scheme themed to the seasons as a calming and normalizing feature for the inmates. Photo Credit: LaBella Associates

LaBella Associates was the architect on the project and BBL Construction Services was the construction manager.

The challenge of this project was to design a new 70-cell direct supervision facility on a site with wetlands and hilly terrain. The building utilized the exterior envelope as the maximum-security barrier so that this facility has a minimum amount of perimeter security fence. All exterior recreation yards are adjacent to the housing units for staff efficiencies, good visibility, and additional natural light into the units.

Due to the efficient size of the facility and to help with staffing costs, LaBella Associates worked with the New York State Commission of Correction to provide three unique and modern direct supervision housing units in lieu of the typical four units that have been constructed around the state.

To accomplish this, all areas had to be designed with additional “sub-dayrooms” in order to accommodate all the different population needs of the County. Each housing area features a large mural with A matching paint scheme theme to the seasons as a calming and normalizing feature for the inmates.

This project is a replacement facility for the existing facility that was destroyed by flooding from Hurricane Irene in 2011 with the majority of the work funded through FEMA. Because many other county buildings still remain in the flood plain, it was decided that a large multipurpose room would be included in the project and wired with power and data so that it could be utilized to provide continuity of government for multiple departments for temporary use if a flood of that magnitude ever occurs again in the future. As the District Attorney is located in this complex, this room can also be used for a grand jury as needed.

The project also includes a major offsite utility designed to bring sewer and water in from the Village of Cobleskill.