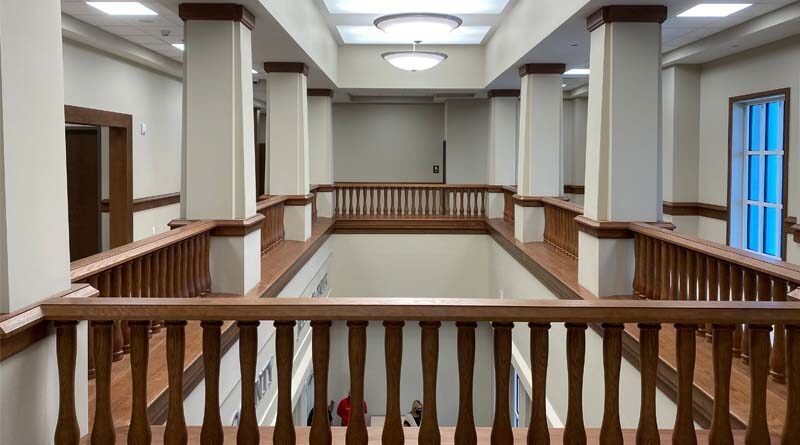 CHARLOTTE, Tenn.—Dickson County officials recently announced that the new Dickson County Justice Center in Charlotte will officially open on Nov. 30 of this year.

An open house of the 70,000-square-foot building was held on Nov. 15. The new $25 million center accommodates all county courts under one roof.

The lower floor consists of secured parking, an inmate and law enforcement entrance, maintenance and support areas and the Juvenile Court. The top two floors accommodate Circuit Court, Chancery Court, General Sessions Court, and Probate Court, all with both Judicial and Clerk functions. A flexible multi-use court room can be configured to handle large conferences, Jury Assembly, and Grand Jury.

The new Dickson County Justice Center replaces the historic 1835 building, which is the oldest courthouse in Tennessee that is still in use. This is actually the second courthouse in Charlotte. The first one—a log building—was destroyed by a tornado in 1833.

The 185-year-old building will remain as the centerpiece of Charlotte Square but serve a new purpose.

“The facility is state-of-the-art on the inside, but it maintains the look and feel of Charlotte and the surrounding buildings in our historic square that make it so special. We look forward to celebrating the building’s opening with community members and our partners who’ve contributed to the success of this project.”

Wold/HFR is the architect on this impressive project. T.W. Frierson is the general contractor.

Said Wold/HFR Principal Stephen Griffin, in a statement. “We’re proud of this new facility and look forward to it serving the community for many years to come. Our team, along with T.W. Frierson, the project’s construction manager, worked closely with the County to design and construct this building and maintain the look of Charlotte’s Courthouse Square Historic District, while increasing functionality of the city’s court system. We’re pleased we were able to bring the County’s vision to life.”

The Justice Center site is located off TN-Highway 49 and is the new focal point for entry into the downtown district.