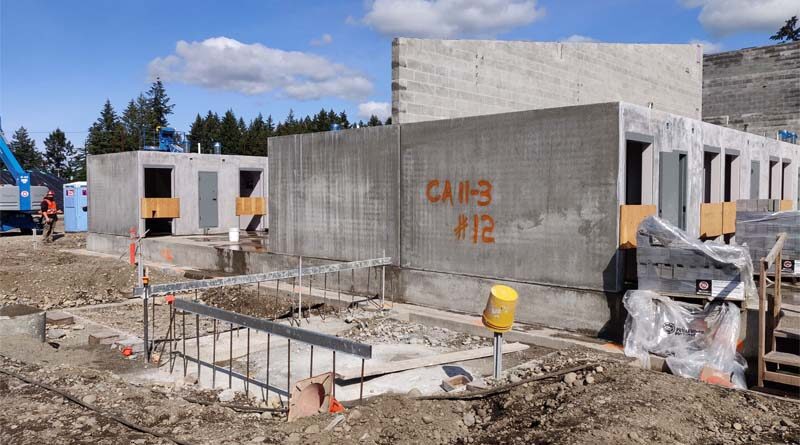 40 miles south of Seattle sits Joint Base Lewis-McChord, which is home to nearly 45,000 service members and civilian workers. The population will soon grow by 150 new residents, only their lives will be much different than the others in the neighborhood. Their mail will be addressed to the Joint Regional Confinement Facility, which is currently being built after the existing aging military prison was demolished in 2019.

The Northwestern Joint Regional Correctional Facility filled an important need on Joint Base Lewis-McChord since 1957. The first detention facility on Fort Lewis was a temporary building erected before World War II when future President Dwight D. Eisenhower was stationed on the installation. It wasn’t until the mid-1950s when a permanent facility was approved. After years of small improvements, but not solving the main structural concerns, it was deemed time to demolish the mishmash of aging buildings and begin anew.

Another key player in the project is Oldcastle Infrastructure, a precast cell manufacturer whose primary role was to supply 104 precast cell units for the housing pods.

Holmberg Mechanical’s Project Manager, Mark Domingo, has learned many new elements of construction in the correctional facility world. “The scheduling and sequencing of how a confinement facility is constructed are more intense than other construction projects. There are so many moving parts. The coordination of all trades for all systems and not clashing internally in a high-security facility means teamwork has never been more critical,” he said. “Working with ligature-resistant fixtures and security bars are new to my experience. You have to think like an inmate. How can I escape? How can use something to hurt me or someone else? It has changed my perspective of how this project will serve others.”

Performing scheduled maintenance or emergency service will be safer once completed, thanks to a strategic design change. Rather than housing the mechanical system rooms within the confinement facility walls, they will be in stand-alone buildings a few hundred feet away, meaning a technician does not have to enter the facility to perform work, will not cause disruptions, or require special clearance.

Kenny Allen, Holmberg Mechanical’s Project Superintendent, shared his insight for this remarkable job. “What a team effort this takes for a job of this magnitude and it is critical to the success of the final result. The design-assist elements of this project have been challenging but well worth the effort. Designing systems for a human to work in, but to not allow someone else inside to access makes this not a typical mechanical contracting project.” Allen has been in the union plumbing trade since 1993.

Holmberg Mechanical is also bringing the correctional facility into the modern age with energy-competent products and equipment to meet the Federal Energy Management Program’s recommended efficiency levels. For the HVAC equipment, utility monitoring and controls systems are supervised through a Building Management System with a computer-based program. This sophisticated system will help reduce the workforce required to operate, it automates the controls for optimal energy usage, and saves energy consumption through constant monitoring.

The construction of a brand new nearly $80 million facility ensures it will continue to do so for decades more. An estimated 3,200 cubic square feet of concrete will be required for completion. But it’s more than simply a prison, and it takes more than a building to complete a mission that requires constant training and around the clock operations. The original facility was designed and constructed for only male prisoners. The new one will have a separate area for females, creating a more diverse way to utilize the space. The facility will house minimum and medium security prisoners from all branches of the U.S. Armed Forces. Once completed it will be home again to the infamous inmate, Robert Bales, a former Army soldier, who was found responsible for the Kandahar Massacre, which killed 16 civilians and injured six. He was held in the old facility until its demolition.

All of the hard work will pay off when military prisoners will be able to serve time safely along with a variety of correctional, vocational, behavioral health, and treatment programs to assist in a positive return to society. During their stay, inmates will have the opportunity to enroll in programs such as small engine repair, carpentry, barbering skills, even learning how to raise bees, to help them become skillfully employed once released. The horticulture program donates thousands of pounds of fresh produce to local food banks.