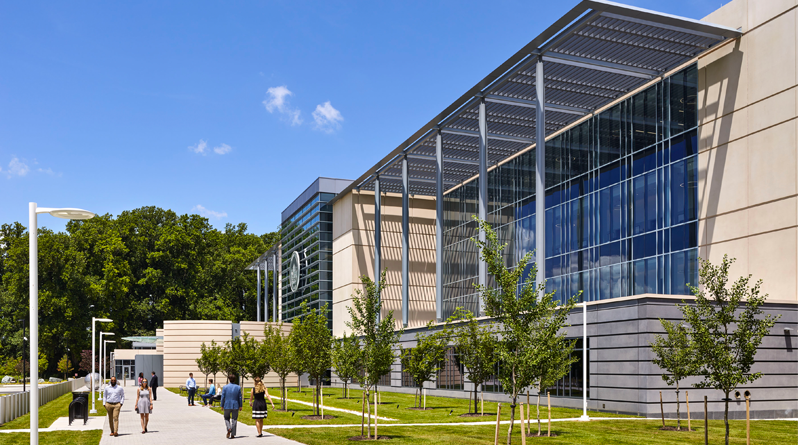 COLUMBIA, Md.—Howard County Executive Calvin Ball, State and local officials recently cut the ribbon on the new Howard County Circuit Courthouse in Columbia, part of the Baltimore metropolitan area. The 238,000-square-foot facility was completed on time and on budget, despite the pandemic, through Howard County’s first public-private partnership (P3).

The new courthouse is the largest capital project in Howard County history and replaces the County’s 175-year-old historic courthouse that presented numerous deficiencies and challenges.

“Howard County’s new Circuit Courthouse is an outstanding achievement and a model for the rest of our country,” said Ball. “This was a monumental feat and would not have been possible without the dedication and partnership of Edgemoor-Star America Judicial Partners, the entire design-build team including Clark Construction, Harkins Builders, HOK, and Johnson Controls, our local business community and many County employees who have overseen this project from the beginning. Standing here today, it’s clear that our team has created a beautiful space that will improve our public safety, is environmentally sustainable and provides greater access to justice for our community.”

The new courthouse features a four-story atrium, a large entryway for safety screening for those entering the Courthouse and separate hallways and elevators for detainees. The Courthouse also includes office space for the Howard County State’s Attorney, Howard County Sheriff, Howard County Bar Association, Maryland Public Defender, Clerk of the Court and Register of Wills. Additionally, there is a courtroom for a sixth judge, a larger and more comfortable jury assembly area and a 682-space parking garage adjacent to the building.

The project has won multiple awards from P3 Bulletin including Best Social Infrastructure Project, Best Financial Structure and Government Agency of the Year.

The courthouse will be certified as LEED Gold for sustainability. Notably, the project did not result in the removal of any existing trees on site and planted 100 new trees. Overall, the impervious surfaces on the site were reduced by 50 percent. Additionally, solar arrays will be placed in the adjacent field to the courthouse. The solar arrays are projected to supply 59 percent of the building’s energy demand and produce 1,177,500 kilowatt-hours of electricity per year. This is roughly the equivalent of powering 141 homes and the CO2 offset by this clean energy generation is equivalent to planting 13,090 trees.

“Clark is proud to have led the design-build efforts for the project in concert with the County, HOK and the entire design team, Harkins Builders, Edgemoor-Star America Judicial Partners and all of our trade partners, including the local and minority small business partners to deliver this critical asset for the Howard County community,” said Mike Hartman, division president at Clark Construction Group. “The trust and support of these parties were integral in making this project a resounding success.”

“We are proud to serve the people of Howard County by designing such a much-needed new civic resource,” said Bill Hellmuth, FAIA, chief executive officer of HOK and design principal of its Washington, D.C., practice. “The design respects the dignity of the judicial process while creating a warm, welcoming public space for the citizens of Howard County.”