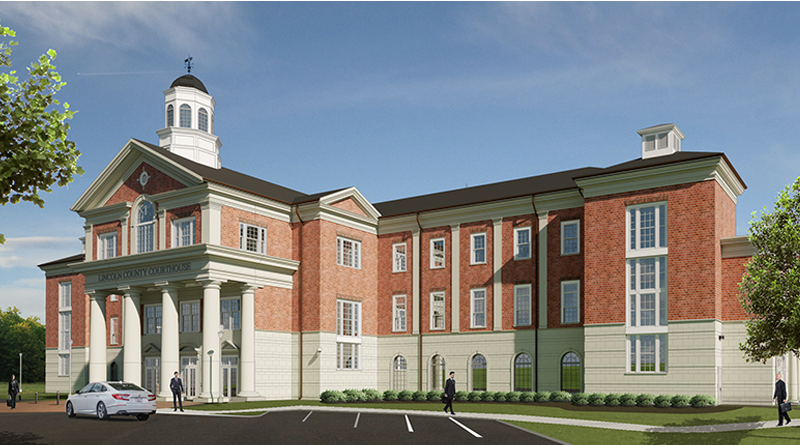 LINCOLNTON, N.C.—Lincoln County court officials recently joined in celebration with Lincoln County government officials in announcing the opening of the new Lincoln County Courthouse located at 120 Justice Drive, Lincolnton. The new court facility will open to the public on Monday, June 27, 2022, at 8:30 a.m.

“We are grateful to our Lincoln County Commissioners, past and present, who have contributed to the plans and funding for this beautiful new facility,” said Senior Resident Superior Court Judge Forrest D. Bridges. “It has been challenging to come up with a plan for a building that will accommodate current and future needs of the court system, made even more difficult by the prospects of moving from a beloved historic building that has served as a centerpiece of the downtown area for the past century. We feel that this new building will carry forward much of the beauty and tradition of our historic courthouse while providing the physical space and efficiencies that will be demanded by Lincoln County as it continues to grow at a rapid pace.”

The three‐story, 105,000-square‐foot court facility designed by Moseley Architects and constructed by Barnhill Contracting Company is home to the offices of the clerk of superior court, district attorney, magistrate, guardian ad litem, public defender, probation, and judicial offices for district and superior court. The $36.5 million‐dollar facility also houses nine courtrooms and features designated areas for jury assembly and grand jurors, multiple attorney‐client meeting spaces, and new furnishings for all courtrooms and spaces. The facility is equipped with the latest technology, multiple public restrooms, and a designated area for secure inmate transfers to and from the courthouse.

“Over the past thirty years I have been involved in many discussions concerning the old courthouse and how it lacks technology, security, and adequate parking,” said Atkins. “When I was appointed as county manager in 2014, one of the first goals was to review the status of all county-owned buildings and decide what needed to be done to correct any issues with existing buildings. Over the past eight years, the County has made great strides in improving many public buildings; however, none were more important than addressing the courthouse issues that existed. After many meetings between local and state leaders, the new courthouse design was completed in 2019. I am very proud of the decision of the commissioners to build a courthouse that offers improved security, technology, and is expected to last well over 100 years.”

“We feel that this new building will carry forward much of the beauty and tradition of our historic courthouse while providing the physical space and efficiencies that will be demanded by Lincoln County as it continues to grow at a rapid pace,” said Judge Forrest D. Bridges.