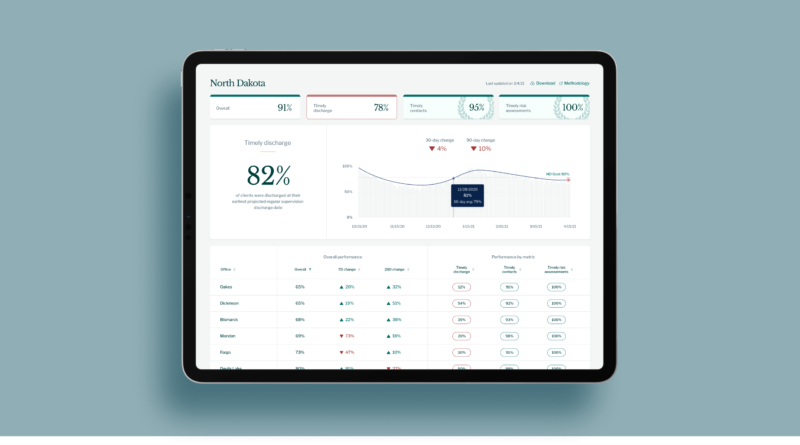 “Real-time data” may sound like a business buzzword. But it is more than just buzz. Over the last decade, the ability to immediately understand and analyze situations as they unfold has transformed every major industry. Supply chain managers can place orders when store inventory runs low. Marketers can make the most compelling offer to the right audience. And engineers can improve their products based on immediate user feedback.

Real-time data has been pivotal – in every industry except corrections. For corrections decision-makers, from leadership to line staff, real-time data is surprisingly hard to come by. Decisions are often made based on reports or studies that are months or years old. And staff members develop case plans using whatever information they can parse together from old files.

According to Idaho Department of Corrections Director Josh Tewalt, “these data challenges are system challenges and not failures of the talented people held hostage by disparate and antiquated system.” And there is a tremendous opportunity for accessible, real-time data to be as transformative in corrections as it has been across other industries.

Right now, one of the significant challenges to achieving that promise is the data systems that underpin corrections. These systems were built decades ago, and data is fragmented across different databases, Excel spreadsheets, and even handwritten on paper. This outdated IT infrastructure makes it impossible for leaders and staff to understand where they stand at any given moment, making it difficult to address complex challenges like staffing shortages, plan for the future, and pursue ambitious transformations.

The organization I co-founded, Recidiviz, aims to solve that problem. Our mission is to bring clarity to corrections by providing clear, actionable, and current data – insights that help government leaders and impacted communities know where they are and how they can chart a path forward confidently.

Here are some of the things our partners have accomplished:

Before working with Recidiviz, an Idaho parole officer needed to manually check 21 different requirements across five databases to know whether someone on supervision was eligible to be released from supervision or moved to online-only supervision. This was a time-consuming task for just one person (the average parole officer may be responsible for 90+ people). Today, that same officer can use Recidiviz’s tech to see everyone eligible for release in one place and take action — releasing them or moving them to online-only supervision as soon as they are eligible. Within six months of this tool launching in Idaho, 5% of people on probation and parole had been moved to lower levels of supervision or were released entirely.

The Tennessee Department of Correction (TDOC) uses Recidiviz’s tools to help increase probation and parole officer efficiency. Previously, officers navigated multiple systems to determine if individuals were eligible for the department’s lower-level supervision. Recidiviz built a tool for officers that automatically entered the required data for enrollment forms, pulling the information from various data systems, significantly reducing the administrative workload for officers. In five months, the number of Tennesseans transferred to this lower level of supervision increased by 30 percent. Additionally, by reducing the time to perform this task from 30 minutes to five, the tool saved staff 1,000+ hours over five months. That’s the equivalent of 25 work weeks for one full-time employee.

Recidiviz is a bit like Google Maps – a product I worked on at Google. Like Google Maps, Recidiviz first builds a comprehensive data layer, bringing together data from various sources. For Google Maps, this might mean satellite imagery, street maps, and local business listings, while for Recidiviz it could be sentencing data, spreadsheets of treatment programs, infraction type, or housing history. Then Recidiviz can build individual tools that use that data to answer a specific question or solve a problem – just like how Google Maps has navigation mode to get through traffic or the little blue dot to show you exactly where you are in the world. These tools make all of that complex, underlying data clear and actionable. This means that staff knows where they are today, where they are heading, and when they should reroute due to obstacles.

“Recidiviz’s tools and insights are strengthening our research team’s ability to present clear, personalized data that informs how our leaders and staff make decisions,” said Sherri Black, who leads the research team at the Maine Department of Corrections.

Eleven states, red and blue, big and small, are using Recidiviz’s tools and analytics to safely move people closer to liberty, triage caseloads, automate cumbersome processes, and analyze trends around staffing shortages, facility safety, and program impact. In just four years, we have reached 25 percent of the U.S. incarcerated population and are helping to move the corrections field to a more data-informed perspective.

We believe behind every data point is a story. And stories like those of Angie’s are a testament to the power of data. In 2018, Angie was sentenced to four years on probation for a drug charge. At sentencing, the judge told her that if she did well, she could cut her sentence in half. She excelled – got sober, found housing and employment, and helped raise her children. Despite doing everything the judge asked, she remained on probation. Angie’s parole officer, Allison, knew Angie was doing well, but to discharge her, she had to check 21 requirements in five different databases while also supervising 90 other people. To help, Recidiviz launched a tool to make Allison’s work easier, and within weeks, Angie was released.

There are thousands of Angies out there – being supervised at higher levels than they need to be or on parole or probation past their sentence – bogging down overburdened corrections staff already struggling with staffing shortages.

We can find every Angie across the country with the proper underlying data infrastructure. We can make Allison’s job more manageable, and we can give her boss and her boss’s boss insight into what is working and what is not. We can help leadership implement existing policies and forecast the impact of potential policies and programs, like geriatric parole or home confinement. We can reduce costs by shrinking the system without sacrificing public safety. And we can solve some of the most pressing problems facing corrections agencies today: staffing shortages, keeping staff and people in custody safe, and cementing a restorative culture.

All of this progress is possible, but the first and most essential ingredient they all require is real-time data. By bringing precise, actionable data and practical tools to corrections, we can help make the criminal justice system safer and fairer — leading to a more effective system and stronger communities.

Clementine Jacoby serves as the Executive Director for Recidiviz.