Articles
April 12, 2010April 12, 2010 2174 Views David Hobstetter, Doug Shaw, Massachusetts Department of Corrections
SAN FRANCISCO — The former federal penitentiary on Alcatraz Island will once again play a role in removing harmful elements from the community after plans emerged for a solar energy system that will reduce carbon emissions from “the Rock.”
Approximately 1,360 solar panels are being installed on the main prison building and ancillary structures to replace two aging diesel generators that power facility operations on the island, according to the National Park Service, which operates Alcatraz.
The project is being funded through the American Recovery and Reinvestment, which appropriated $3 billion to the Department of the Interior. The National Park Service received $754 million in stimulus funding for investments in critical infrastructure and facilities, energy efficiency and renewable en 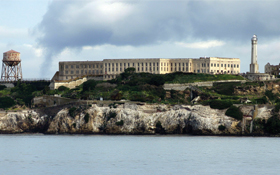 ergy initiatives. Almost $260 million of the park service’s ARRA funding was directed to projects throughout California.
“We are extremely excited to have the opportunity to do so much more with our Recovery Act funding than we originally planned,” says Jon Jarvis, director of the National Park Service. “These projects represent critical priorities for us that will also benefit the economy and create jobs in the near term.”
The renewable energy installation will generate an estimated 285 kilowatts of electricity — 40 percent to 60 percent of the electricity for Alcatraz, which attracts about 1 million visitors every year. The existing generators produce significant carbon emissions and particulate matter and are inefficient and expensive to operate, with annual diesel and maintenance costs of about $700,000, officials say.
The nearly 900 solar panels on the roof of the main building will be concealed from view by a 5-foot wall encircling the installation, officials say. Although the solar array located on the roof of the laundry building remain visible, the more than 460 panels were installed in a flat configuration to minimize the visual impact on the historic facilities.
Favorable bids and pricing on the first round of National Park Service projects yielded savings of more than 20 percent, which totaled $129 million less than estimates. In addition to the almost 70 new projects funded by the stimulus package, NPS officials redirected the surplus to fund critical facility improvements, infrastructure repairs and energy efficiency enhancements on 30 high priority projects across the United States
“Because of the economy, the contractors are so hungry their bids are coming in at less than we estimated. So now all of a sudden we’ve got extra money,” says Dave Barna, a spokesman for the National Park Service.
“This is good news for taxpayers. It’s spreading the money to more parks and more projects. We’re getting more bang for the buck. The dollars are going further,” he says.
The NPS also announced the replacement of 26 projects previously earmarked for funding with 36 backup projects that will receive a total of $9.3 million.
It was necessary to remove those initial projects from the funding plan for a number of reasons, officials say. Some were already completed using non-ARRA funds, while many were removed from the NPS list because they could not be completed within the time frame specified under the Recovery Act. Replacement projects were promoted from a contingency list using established merit-based criteria, including expediency of implementation and ability to address high-priority mission needs, officials say.