Featured Articles
May 19, 2011May 20, 2011 1629 Views JE Dunn, San Quentin, Singapore
Epicenters
There are several regions across the United States that the editors of Correctional News have identified as areas that are central to the construction and operation of Correctional Facilities. In addition to Alabama, pervious profiles include the Metro Chicago area and Atlanta/North Georgia. What region do you think should be next? Send feedback to cn@emlenmedia.com.

It starts around the high-tech Huntsville-Decatur area in the hills and bisects the state like a silver zipper for 360 miles to Mobile on the coast. The Security Electronics Corridor of Alabama has furnished hollow metal doors and locks, surveillance and monitoring equipment, and blast-resistant materials to rural county jails as well as embassies in trouble spots around the world.

“I think Southern culture in general encourages the spirit of entrepreneurship,” says Mitch Claborn, president and CEO of Cornerstone Detention Products, based in Tanner, just outside Huntsville. “We’re independent-minded and tend to have this work ethic that emphasizes making it on our own.”
The demographic shifts in population and in manufacturing from North to South, the trend toward privatization, and the strength of the steel industry have also made it cheaper and easier to operate in the South, Claborn says.
“Those are a few factors in how this industry has developed here over the years,” he says.
Many of the oldest companies are clustered around the “The River City” of Decatur, Claborn says, citing Decatur Iron and Steel, established in the early 1940s, as the “great-great-great-granddaddy” of the corporate family tree.
“Willo hatched off them in 1945, and then came Roanoke Iron and Bridge, Southern division, which then spun off Slate Security,” he says. “Then Roanoke shut down, and Norment in Montgomery got into detention in the 1980s. U.S. Security Systems, Montgomery Technology Inc., and several other companies, came out of Norment.”
Claborn, who has worked for Willo, Norment, and Slate, started Cornerstone in his modest garage in 1998. The company now employs 52 people and is ranked as one of the “Fastest Growing Private Companies” by Inc. 500.
“We’ve spawned at least four or five other successful companies — the free enterprise system at work — and we all stay friends,” says Jack Ozier, president of Willo and son of its founder, Melvin Ozier.
These detention specialists often meet-and-greet over sweet tea at Big Bob Gibson Bar-B-Q, a Memphis in May champion known for its “killer lemon pie,” Claborn says, and for more formal occasions, Simp McGhee’s, a Cajun fine-dining establishment named for “an infamously boisterous” Decatur riverboat captain.
Ozier, an Auburn alumnus, and his brother Lynn, who went to Vanderbilt and Rice University, joined the family business in 1973 and eventually shifted its focus from structural steel to locks.
“We’ve been going strong in the renovation market lately, evaluating older devices then enhancing and improving them with retrofitting, which saves the facility down-time and money because they don’t have go for total replacement,” Ozier says.
Other major players in the corridor include Black Creek Integrated Systems in Irondale and SimplexGrinnell, which specializes in 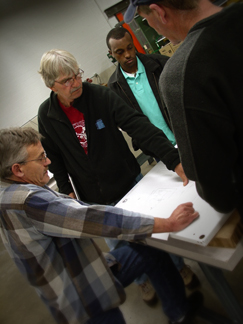 alarm systems and integrated security, sound and healthcare communications.
Two behemoths with offices in Montgomery are Norment Security Group, a detention systems contractor with single-source responsibility for products and installation from beginning to turnover of corrections projects, and Norshield, a globally recognized industry leader in armoring at-risk installations against external attacks.
Norshield, which engineers, designs and manufactures certified ballistic-, attack- and blast-resistant products, was launched in 1981 to help the U.S. Department of State upgrade its security at embassy sites around the world, and it has since completed more than 8,000 projects from the Middle East to the White House to small-town police precincts.
Claborn traces the state’s pool of expertise in part to the vocational-technical and co-op programs for drafting and engineering in Alabama high schools.
“Those were wonderful programs that functioned as a sort of feeder system, and the five of us who were with me in my co-op program, which I entered in 1978 to work at Willo, are still in the business today,” he says, recalling his early days of stocking the old blueprint machines with ammonia. “The founder, Melvin Ozier didn’t draft with a heavy hand, so one time I cranked up the machine as high as it would go, and that thing went haywire, shredding and spitting out paper, which I frantically tried to Scotch-tape together. He’d been working on that project for months. He could’ve fired me on the spot then and there, but he didn’t.”
Adds Jack Ozier in a courtly, ’bama drawl, “While we stay competitive and meet our deadlines, we’ve always tried to minimize unnecessary stress and create a family atmosphere.”
His grandmother, Lossie Mitchell Ozier — known to everyone as “Muzz” — served as Willo’s matriarch, he says.
“She was quite a colorful character loved by everyone,” Ozier says. “She was very thrifty and insisted on keeping the cash accounts in three coffee cans.”
Like most Southern institutions, the Decatur-Mobile corridor celebrates its past, but it also extends its warm hospitality to digital innovation. Cornerstone relies on iPads and custom apps at its sites, and is moving toward a paperless workplace. Black Creek has pioneered the development of touch-screen control systems, among other staff-saving measures for correctional facilities.
“Change is hard, but we’ve all come a long way,” says Randy Hill, a sales manager for Black Creek. “When we first started investigating touch-screen possibilities in the 1980s, a lot of people thought it would never take off, that it was just too pie in the sky.”
Black Creek offers video visitation systems, which reduce contraband, and RFID inmate tracking, the real-time monitoring system lauded for reducing assaults and other mayhem. The company also is working on digital records management as a way of streamlining bureaucracy.
Governments can be reluctant to finance detention technology, Hill says, but they are coming around to see its proven benefits.
“There’s this misperception that it’s about coddling the inmates,” Hill says. “But let’s face it, it’s easier on staff and safer for them to open a door electronically instead of walking around with a key. These innovations are designed for efficiency — to centralize operations in a way that saves time and money while strengthening security for everybody.”