Locating the Central Control Room to Look Directly Into Housing: 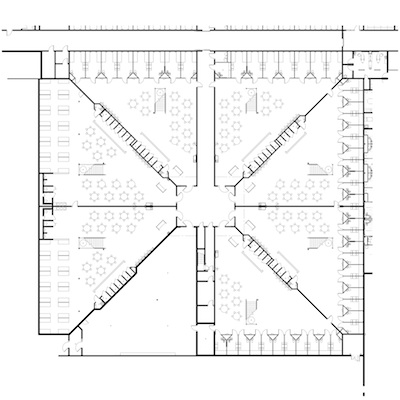 Central control rooms in detention facilities are often removed from housing and operate exclusively through intercom and video media. The new South Correctional Entity (SCORE) — which serves seven communities with an 813-bed capacity — uses a radial 360° housing array with housing units arranged around a mezzanine-level central control room that allows for direct vision into the units. This centralized layout was specifically selected for direct supervision operations in the daytime, changing to indirect supervision during the night shift to reduce staffing costs, but other operational benefits are also apparent: (1) control room staff are now connected by direct line of sight to all the dayrooms, (2) inmates are conscious of additional supervision, (3) direct supervision staff operations in the dayrooms is being monitored by the control room staff, and (4) there is a visual “geographical” understanding of the facility layout by the control room staff. These heightened central relationships create confidence in the institution’s ability to maintain safety, order, and control.

Most control rooms are furnished with counter-mounted video displays and touch screens. The intended visual linkage between the controls operator and the dayrooms beyond for the SCORE facility control room required other solutions. The designer also wanted to depart from the business computer scale of the usual security controls setup and graduate to a “control deck scale” that has a physical relationship with the scale of the building. These goals resulted in the following physical design features: 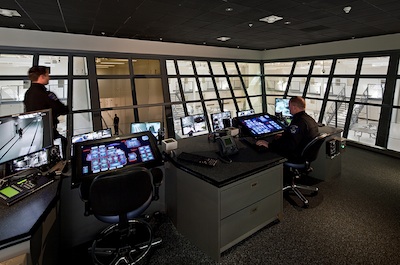 The overall control room is large at 25’ x 35’, and the full-height mirrored security glass enclosure tilts outward from the floor edge like an airport control tower. A 15’ x 25’ raised operator’s podium is provided in the center of the overall control room so that the seated operator can view more of the dayroom floor area, as the window sill is placed at a lower elevation. 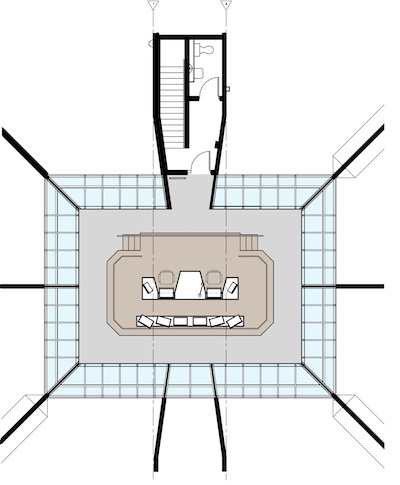 The video displays that are usually counter-mounted surrounding the operator are, instead, set on adjustable floor standards in front of the controls desk. These six monitors are large 26” displays, which can be focused on the seated control operator’s position.

The displays in this location are at the bottom of the view into the dayrooms. This alignment is an important ergonomic consideration, allowing the operator to lower his view into the dayroom only a few degrees to see the monitors. This can be done with eye movement as opposed to head movement, which is needed to view overhead displays. Both the size of the displays and the ease of viewing them are intended to encourage operator observance. There is a separate intercom call-up 24” video display adjacent to the touch screen.

• Dual Stations for Training, Heavy Use Periods, and Redundancy: The dual touch screen stations allow for training and anticipated downtime. Spare replacement units are stored on-site to minimize interruptions for repairs. The control station is designed with the capacity to take over security control operations of the second adjacent 400-bed array, providing 100% system redundancy with SCORE.

• Controls Equipment and Software is 100% Non-Proprietary for Renewal and Repair: 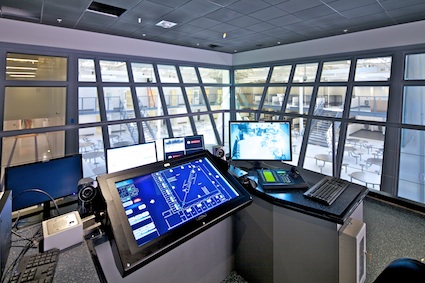 The facility will be owner maintained, and every provision for serviceability has been adopted. The integrated controls functions include the following:

The completed SCORE project has many interesting new features, equipment, and departmental layouts, but the concept of the control rooms is the one memorable feature that attracts touring corrections professionals. The centrality of the housing layout with the central control room — at the center — is an astoundingly convincing relationship, and the integration of the central controls hardware into the building architecture is also physically appropriate.