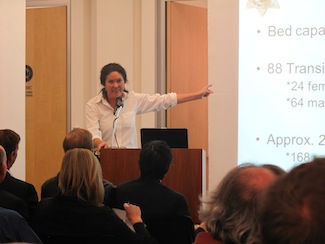 The American Institute of Architects (AIA) in San Francisco hosted a detention center presentation with guest speaker Lt. Debra Bazan, executive project manager of the Jail Planning Unit for San Mateo County. Bazan discussed the county’s recent endeavor: designing the Redwood City detention center. The audience consisted of approximately 60 professionals from prestigious construction and architectural firms throughout the country, which might compete in a future bid to design the new facility.

Bazan pinpointed the necessities for the jail and emphasized the importance of the architect’s dedication to the project, expected to be complete by 2014.

“I want your heart and soul in this. You might have many projects come and go, but this is it for us,” Bazan said to those interested in pursuing the project.

Bazan stressed the importance of the facility’s details, which could mean life or death for both inmates and correctional officers at the facility. The designer of the facility must be cognizant of inmate behavior and plan accordingly, she said. For instance, flooring materials must be taken into account to prevent an inmate from “soaping up” in order to create a slippery effect to avoid being detained by a correctional officer during a fight.

Some of the absolute necessities weren’t designed specifically for the inmates but for the staff’s well-being. Bazan exaggerated the crucial need for staff amenities, including lockers, mail service, dining halls, and a gym. She explained that the architect must work with the planning unit to include non-negotiable items for the staff in order to increase workforce morale and provide staff members with a safe, secure, and healthy work environment.

The 257,112-square-foot facility will be designed for a 488- to 552-bed capacity and also include a warm-shell for out-of-custody programs — but with the flexibility to convert into a hard-shell jail if the population increases. The warm-shell conversion is a crucial component of the design.
“The sheriff [Greg Munks] is happy because he has the ability to grow to what he feels is the desired number, but the board is also happy in these economic times that we are not building to full-capacity,” said Bazan. “It’s the thing that’s getting our project our project.”

“The county has really embraced and wrapped their arms around alternatives and trying to reduce recidivism,” said Bazan. “We need to have the programming and anything that we can do that’s been tried and true that can help inmates stay out of jail, not come back and ultimately break that cycle.”
Bazan wanted all potential partners to recognize the many issues involved in designing a prison. She addressed a past issue that designers need to be informed about in order to design a secure facility that runs smoothly.

The South Bay Sewer Authority (SBSA) sued the county in the past for clogging the Redwood City sewage system. Bazan explained that inmates frequently flush clothing and garbage down the drains, which ultimately leads to a $30 million problem. A $2.3 million settlement was reached between the SBSA and the county jail.

Bazan explained that whoever is commissioned for the job should be aware of all the possibilities and design accordingly. She also discussed other design needs, such as rear cell service and plumbing chases, a prominent front lobby, consideration for the surrounding areas, daylight harvesting, and a recycling project.

Differing inmate needs affect facility design. Female inmates have certain needs that may not apply to male inmates. According to Bazan, relationships are key for female inmates. To address that need, she suggested creating smaller subunits to foster a sense of community. Other considerations for women include a mother/child separate living unit, spiritual care, stress management, and facilities to develop marketable skills, such as culinary tasks.

Among the challenges is the design of the visitation areas. Visitation at the new facility will include video visitation as well as a children’s area. Bazen’s requirements for designing the children’s area include a bright and inviting environment that makes children and families feel safe and welcome. A prison design is not usually thought of as inviting, bright, or friendly, but in order to accommodate the children visiting their loved ones as well as set a peaceful tone, the design aspects of the visitation area must be executed in a “softer” manner, she explained.

The jail design must also take into account some statistics that Bazan eagerly pointed out to the architects. She explained that a jail’s most vulnerable time for escape is during the first year of operations. In order to combat that statistic, Bazan expressed the need for careful planning and design, including workforce management. She needs workers on the project to be aware of their surroundings and equipment at all times while on the site.

Request for Qualifications for architectural services were sent out Dec. 9 and are due back to the sheriff’s office by Jan. 12, 2012. Request for Proposals were issued Dec. 15, and responses were due back by Jan. 4, 2012, for consideration.