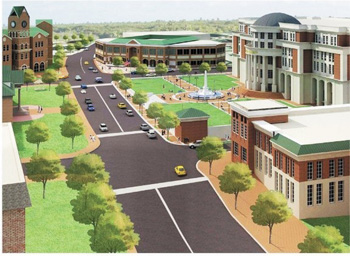 FORSYTH COUNTY, Ga. — A lot of change is set to happen in Forsyth County, as plans are moving forward on a major construction project.

In early January, the Forsyth County Board of Commissioners were given plans for a new courthouse project and were also briefed on the plans to make it happen, including demolishing the current jail and building two parking garages instead of one.

The original plans called for the renovation of the jail, but after further studies it seemed more efficient and cost-effective to demolish the jail entirely. Joe Lee of Carter Goble Lee (CGL), project manager, said that after a study the existing jail showed repair costs could total $3.5 million, while building a completely new jail would only be slightly higher, at $4.8 million.

After presenting the plans to the commission in charge of accepting and proceeding with the project, they agreed with the recommendations, which would require the project team to demolish the existing jail. The demolition will make up the first portion of the project and will begin in January, ending in March.

CGL will be responsible for the project management, which is expected to cost somewhere around $76 million, and not to exceed $100 million, although the amount has not yet been finalized.

Lee said CGL will manage the project and total cost in the short-term and long-term. Lee told the Forsyth News, “We believe it’s going to be a premier project.”

After the demolition, construction is scheduled to begin in July and last approximately 18 months. Completion is currently being slated for the end of 2014, according to Lee.

Wakefield Beasley Associates and HOK have been selected as the architects, along with a joint venture of Turner Construction and Winter Construction as construction manager. The Turner/Winter team has had past experience working on a jail and courthouse simultaneously and were chosen for this project based on their history.

Industrial Facilities Solutions, a Gainesville, Ga.-based company, will handle the demolition of the 246-space parking deck. The new structure will be divided into 450 spaces at the administration building and 250 by the Tyson plant, according to Doug Shaw of architect firm Wakefield Beasley Associates. Lee also told the Forsyth News that both parking decks will have the ability to be expanded by one or two levels.